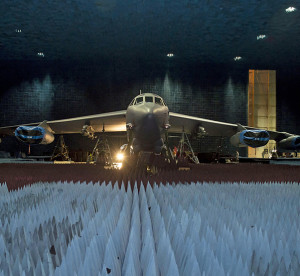 A B-52 Stratofortress prepares to undergo electronic warfare testing in the Benefield Anechoic Facility Jan. 10, 2017.

Imagine walking into the Benefield Anechoic Facility at Edwards Air Force Base, Calif., putting on an augmented reality visor and “seeing” your proposed test setup or being able to view test scenarios and test results, all without being disconnected from those around you.

What if you could see virtual antenna polar patterns superimposed on aircraft or the effects of electromagnetic interference?

Those are just some of the potential uses of emerging AR technology and the 412th Electronic Warfare Group is eager to use the technology to explore the invisible world. EWG’s Modeling and Simulation Flight, headed by Jerry Lockwood, plans to acquire several Microsoft HoloLens and Meta 2 AR systems to begin developing AR models and integrating the use of AR into the EW workflow and expand their capabilities.

That’s only the beginning, proponents say. AR systems could eventually be loaded with 3-D renderings of the internal structures, wiring, hydraulic and fuel systems of aircraft to aid maintainers in their work and streamline aircraft maintenance operations.

When you take a minute to look around, its easy to identify potential uses for AR technology in the Air Force both today and in the future and the Modeling and Simulation Flight intends to exploit those opportunities.

To learn more about the 412th TW innovation program, or to submit ideas, email theodore.wuth@us.af.mil or christopher.nagel.1@us.af.mil.