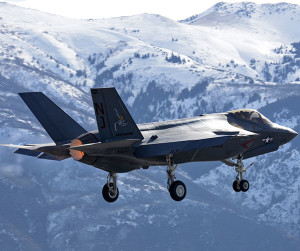 The Ogden Air Logistics Complex in Ogden, Utah, accomplished another “first” in support of the F-35 Lightning II program.

The aircraft arrived at Hill AFB in April 2016 from Eglin AFB, Fla., and over the past 10 months underwent required structural modifications to remove and replace life limiting parts and other upgrades.

The aircraft was originally assigned to the “Grim Reapers” of Strike Fighter Squadron (VFA) 101 at Eglin AFB. While at Hill AFB the aircraft was transferred to Air Test and Evaluation Squadron NINE Detachment Edwards to participate in the F-35C testing and evaluation program.

Ogden ALC officials credited teamwork with Lockheed-Martin and the Joint Program Office for the successful delivery. The Ogden ALC is expected to deliver two additional aircraft back to the Navy later this month.