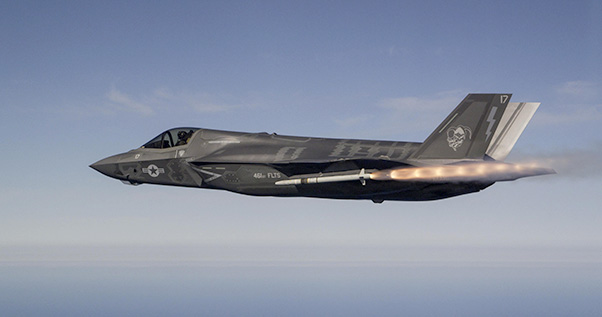 The weapons were released from a U.S. Marine Corps F-35B Lightning II, short takeoff/vertical landing variant, which will also be used by the U.K’s Royal Air Force and Navy.

The 461st FLTS is responsible for the execution of all mission systems developmental testing for U.K. F-35Bs.

According to the Royal Air Force, the ASRAAM is a short-range, infrared-guided missile carried by the RAF’s Eurofighter Typhoons and Panavia Tornado GR4s.

The Paveway IV is an advanced and highly accurate, state-of-the-art precision guided bomb. It’s an all-weather bomb with inertial navigation and GPS- and laser-guided bombing capabilities that is used by RAF and Royal Navy fighters.

Collin O’Fallon, F-35 weapon integration engineer, said two tests have been conducted with the Paveway IV. The first test was executed at Naval Air Weapons Station China Lake and was a laser-mode employment of the guided bomb against a tank on the ground. The second test was conducted over Edwards AFB’s Precision Impact Range Area to test the bomb’s GPS/inertial navigation employment against a tank. 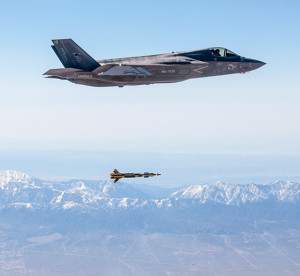 On Feb. 24, one U.K. AIM-132 ASRAAM was fired at an unmanned drone over the Point Mugu Sea Range off of the California coast.

“The purpose of the test was to verify that the F-35 system could be used to target and engage an air target with an ASRAAM,” said Max Heald, 461st FLTS, F-35 weapon integration engineer. “The test also verified that the F-35 properly communicated to the missile and gave it everything it needed to prosecute a target.”

Heald added the data collected in the test provided evidence to the weapon supplier they could use to certify AIM-132 ASRAAM carriage on the F-35B.