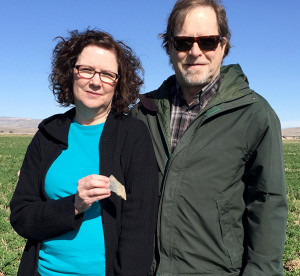 Ceil Davis and her husband, Bob, show a blistered piece of aircraft window found in a field near Barstow, Calif. The location was where her father, Douglas test pilot Tom Kilgariff, was killed when the A-3D Skywarrior, he was testing crashed.

The wife and children he left behind eventually moved away and went on with their lives in other parts of the country.

Fast forward nearly 60 years. A woman from Alabama is visiting her deceased father’s siblings in California when she gets curious about her father’s workplace and the job that took his life.

Ceil Davis and her husband, Bob, decided they’d like to visit Edwards Air Force Base, Calif., by taking the Friday public tour in February 2016, but found out that it’s not that simple.

“I thought sometime I’d like to come out and see what it’s like,” she said. “We tried the public tour but found it was booked months in advance.”

They signed up for the next available tour — October, 2016 — and planned their next trip to California around it.
During the tour, the host, Steve Zapka of 412th Test Wing Public Affairs, happened to mention the restored A-3 the Air Force Flight Test Museum had in storage.

“That was the plane my dad flew when he died,” Davis said. “So I asked him, “Where is the restored plane?”

Zapka ended up introducing Davis to Tony Moore of the Air Force Flight Test Museum, who offered to sponsor her back for a personal visit to the aircraft and an excursion to the crash site.

Davis, who was four when her father died, said she wasn’t really sure she wanted to do that. She wanted to stay anonymous, but after her mother passed she found a bunch of old 8×10 photos. “They were official Air Force photos of people, aircraft and the like. They really connected me with my past and started all the research.”

She eventually contacted Moore, who arranged last month’s visit. They visited the restored aircraft, where she got some pictures in the cockpit, and then they visited the history office.

“We scanned all the photos, and we have some the history office didn’t have,” Davis said. “There was one of my dad with the F-5, and his wingman was Alan Shepherd.” 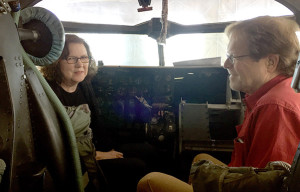 Ceil Davis and her husband Bob admire the cockpit of a restored A-3D Skywarrior belonging to the Air Force Flight Test Museum. Her father, Douglas test pilot Tom Kilgariff, was killed when the A-3D he was testing crashed near Barstow, Calif., Jan. 28, 1958.

“We know most of the crash sites in the area,” Moore said. “After some research, we found the site to within a few acres.”

Moore said that some of the old crash sites are undisturbed and artifacts can be easily found, but this site had been farmed for the last 58 years.

“After a couple of hours walking the area, we had nothing,” Davis said.

As they were almost ready to give up and leave, they looked at the ground by their feet and there was a piece of charred and melted plexiglass, which matched the type used in the A-3D cockpit.

She added to the surreal statement, mentioning that her father was also one of the six founding members of the Society of Experimental Test Pilots and that he was chairman of the equipment and safety committee.