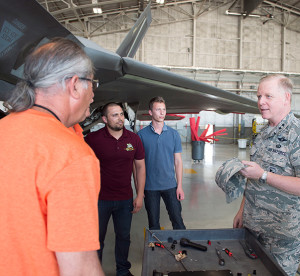 Members of the 411th Flight Test Squadron (left) speak with Maj. Gen. David Harris, Air Force Test Center commander, at the squadron’s new facility March 16, 2017. Harris was conducting one of his monthly visits to various units at Edwards, which offers some time to meet with the 412th Test Wing workforce.

The visit was particularly notable because the 411th FLTS moved to a new facility that just became fully mission operational in February following a large relocation project that lasted almost one year. The facility was previously operated by the 416th Flight Test Squadron, which moved to Bldg. 1199 closer to the flightline. The moves are to make way for upcoming facility renovations that will host new test programs.