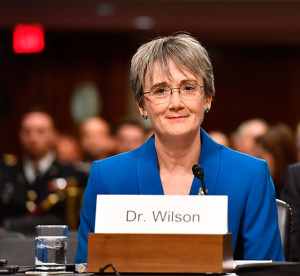 Secretary of the Air Force nominee Heather Wilson testifies before the Senate Armed Services Committee, as a part of the confirmation process March 30, 2017, in Washington, D.C. In her opening statement, Wilson said, “We have the liberty to enjoy our blessings because thousands of America’s best citizens volunteer to protect the rest of us.”

Heather Wilson testified before the Senate Armed Services Committee during her confirmation hearing for secretary of the Air Force in Washington, D.C., March 30, 2017.

“If confirmed, she will become the first Air Force Academy graduate in history to serve as the secretary of the Air Force,” Thune said.

She has served on the National Security staff for President George W. Bush and is currently the president of the South Dakota School for Mines and Technology.

“People who worked with her in South Dakota described her as a great manager and inspiring leader,” Rounds said. “South Dakota’s loss will be our nation’s gain.”

“If confirmed, I will work with the secretary of defense and the United States Congress to restore the readiness of the force,” she said. “I will also work with Congress to address constraints imposed by the Budget Control Act so that the Air Force can be cost-effectively modernized.”

Wilson, the first female veteran to serve in Congress, addressed several topics, including the pilot shortage across the total force.

“We are short fighter pilots,” she said. “The Air Force is not currently ready to fight against a near-peer competitor, and that should concern all of us.”

Wilson said if confirmed as secretary of the Air Force, she will focus on innovation that supports readiness.

“The pace of change is going to accelerate,” Wilson said. “We’re either going to have to rapidly accelerate ourselves and be able to spin-on innovation to the service, or we’re going to be left behind.”

The nominee for secretary of the Air Force concluded her confirmation hearing stating senior leaders need to think about the full range of potential conflicts.

“From low-intensity warfare through a near-peer adversary and nuclear deterrents,” she said. “There are new techniques, and cyber is one of them, that can be used by both nation states and by terrorists or insurgents to achieve their political objectives … we need to be able to play both offense and defense in all of those realms.”