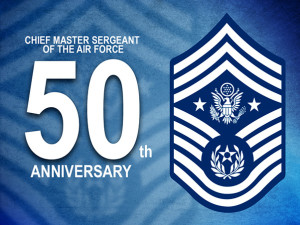 In April 1967, Chief Master Sgt. Paul Airey set on a path untraveled by any other Airman in the U.S. Air Force.

“It was 50 years ago that [Airey] became the first Airman bestowed the honor of being called chief master sergeant of the Air Force,” said Air Force Chief of Staff Gen. David L. Goldfein during the CMSAF transition ceremony Feb. 17, 2017. “This position would shape how the Air Force grew as the newest service.”

In the early 1960s, Congressman Mendel Rivers issued a bill that mandated the appointment of senior enlisted advisers for all services. Though the bill wasn’t passed, Air Force senior leaders decided to create the CMSAF position.

Then-CSAF Gen. John P. McConnell announced the position in 1967 and explained its criteria and duties, “The man selected to fill this job will be used as a representative of the Airman force when and where this is appropriate, and will serve as a sounding board for ideas and proposals affecting Airman matters.”

According to the Airmen Memorial Museum, Airey knew the position was not to be taken lightly.

Since then, only 17 other men have followed in Airey’s esteemed path, yet the impact of these Airmen continuously ricocheted across the force. Over the last five decades, CMSAFs have tackled low retention rates, enhanced professional military education, improved the enlisted promotion system, advocated quality of life initiatives, reinforced the importance of higher education, fought for budget increases and supported joint and coalition operations.

Those improvements may not have been made without Airey taking that first step 50 years ago.

“He was absolutely the right choice to become our first chief master sergeant of the Air Force,” Goldfein said. “He fought for a standardized promotion system and laid the foundation for what would become the professional military education that we know today … creating American Airmen – our most powerful weapon.”