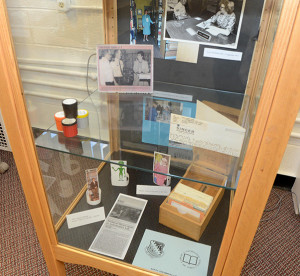 Artifacts depicting women’s history are on display at the Technical Library located in Bldg. 1400.

Women library directors from the earliest days of the Edwards Air Force Base Technical Research Library have provided strong mission-essential support to the scientists, engineers and military assigned to the base – both onsite and at remote locations throughout the nation.

Her transfer to the young library ushered in a period of growth to meet the specialized information requirements of the scientists and engineers at Edwards.

The library’s holdings and manpower slots, both civilian and military, grew under her direction establishing the library as a heavily utilized resource.

By 1956 the reputation for research excellence was so well known that Philip F. Fahey Jr., chief of the Test Engineering Branch, Rocket Engine Test Laboratory, the predecessor of today’s Air Force Research Laboratory Propulsion Division, requested that a branch library be established for them. Under Kraft’s able leadership, the branch was up and running by April 1, 1957.

Kraft departed Edwards in 1958 and Myrtle C. Jones became the next library director.

Under her guidance, the policies for growth continued with the establishment of a field library at the U.S. Air Force Test Pilot School.

Myrtle left in October 1969 and the assistant library director, Jean E. Dickinson became took over. Dickinson introduced many new innovative ideas during her tenure including the use of Singer Business Machines, an early automated system, to improve staff checkout, inventory control and patron access to the collection. While continuing to represent AFFTC on a national scale within the library arena, Dickinson served as the chairperson of the Military Librarians Division from 1980-1981.

Margaret O’Drobinak Brautigam, the director from 1985-1991, oversaw a wide range of changes and improvements.

Early in her time at Edwards, she received the Air Force Systems Command Morale, Welfare and Recreation Special/Technical Librarian of the Year award for 1986 for her new initiatives, achieved-program accomplishments and management of a program of notable scope including the installation of moveable shelving to meet expanding space requirements.

She continued to implement improvements with the planning and opening of a newly constructed free-standing branch library at the AFRL Rocket Lab.  The branch library’s formal opening was June 20, 1990. when AFFTC commander, Maj. Gen. John P. Schoeppner Jr. visited the site. The new building represented another link in the bridge of cooperation between the center and the lab.

Brautigam left AFFTC in 1991 for a position at the Defense Technical Information Center.

Jolaine B. Furgeson Lamb took over as the chief librarian and oversaw the completion of the transition from a paper catalog system to a fully automated catalog computer system.

With her retirement in 2005, her successor, Marie L. Nelson, continued to actively represent AFFTC within the library realm serving as the secretary of the Federal and Armed Forces Libraries Roundtable within the American Library Association from 2004-2006.

In addition, she worked closely with the TPS to establish the AFFTC Technical Library as the TPS library of record to meet the accreditation requirements of the Southern Association of Schools and Colleges for the degree of Master of Science in Flight Test Engineering before her departure in 2009. Jennie C. Paton continues the strong tradition of female librarians at Edwards AFB, serving as the Rocket Lab’s branch librarian since 2001.

The Edwards AFB Technical Research Library continues to provide full reference and research services including inter-library loans while maintaining a collection of technical books, documents, technical reports, periodicals and audiovisual materials in addition to a selection of online databases available through the library’s online catalog webpage.

The library is located in Bldg. 1400, Room 106. While access to the AFRL Rocket Lab Branch is restricted, items held at that location may be requested and brought down for patron use. Currently, the library has a display highlighting the past women directors as part of Women’s History Month and a selection of books on display for checkout on women in aviation and flight testing.