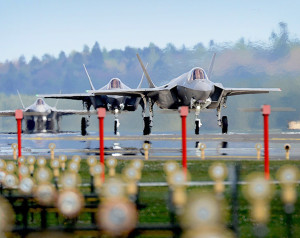 This weekend’s deployment of an initial six F-35A Lightning II fighters and several hundred Airmen to Europe demonstrates the aircraft’s readiness to conduct operations with America’s European partners, according to Air Force leaders.

The April 15, 2017, arrival at Royal Air Force Base Lakenheath, England, marks the first major overseas training deployment for the aircraft and begins several weeks of training for F-35 pilots, maintainers and support personnel with allied and partner nations.

“Our Air Force delivers a broad range of combat airpower advantages to our partners,” said Gen. Mike Holmes, the commander of Air Combat Command, the major command responsible for organizing, training and equipping the F-35A fleet. “Thanks to our world-class Airmen, the F-35 is now part of the mix we bring to strengthening those partnerships and improving regional security.”

The leaders of the 388th Fighter Wing at Hill Air Force Base, Utah, the Air Force’s first operational F-35A unit, echoed those sentiments, expressing their excitement about the mission and admiration for the Airmen who made it happen.

“As the first operational F-35 unit in the Air Force, our Airmen have been working tirelessly—from the achievement of initial operational capability to our deployment to Red Flag,” said Col. David Lyons, the 388th Fighter Wing commander. “We continue to prove the unique capabilities of this revolutionary aircraft, and this first overseas deployment is a natural step in the program.

“A large part of ensuring air dominance in the future will involve integrating operations between platforms and across all coalition partners,” Lyons continued. “The F-35A is on the leading edge of that interoperability. We’re excited to demonstrate those capabilities as well as our commitment to our European allies and partners.”

Col. Michael Miles, the 388th Maintenance Group commander, noted that “any time we get a chance to mobilize and deploy, it sharpens our skills,” adding that it was an exciting to be a part of the F-35A program.

“The culmination of the combined efforts of the entire F-35 community have brought this to fruition,” Miles said. “I am extremely proud of all our Airmen, and I know they are honored to be a part of this important operational milestone.”

During the deployment, Hill Airmen will train in the U.K. and deploy to NATO states in Europe, providing an opportunity for the combat-ready aircraft to perform alongside allies and other types of Air Force aircraft in a realistic training environment.

“The Lightning’s European deployment is another great opportunity to exercise the capabilities of this aircraft and conduct valuable training alongside our allies,” Holmes said. “As we’ve proven with the F-22 Raptor and routinely with our fourth-generation fleet, our strength is the ability to project our power globally and rapidly.”

The F-35A is the latest addition to ACC’s deployable fifth-generation fleet. The aircraft offers air superiority, interdiction, suppression of enemy air defenses and close air support capabilities, as well as advanced tactical command and control functions through the use of fused sensors, which provide pilots with unprecedented situational awareness of the battlespace.