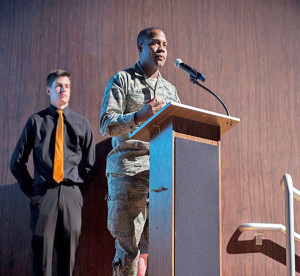 Lancaster High School has teamed with AFRL’s Engineering & Science Producing Inspirational Rewarding Education, or ENSPIRE, program for a year. During that year the team developed the idea to use an electronic instrument known as a Theremin to explore the science of producing synthesized music.

A Theremin electronically synthesizes sounds when hands are waved between two perpendicular antennae that protrude from a box. It was invented by a Russian physicist named Leon Theremin in 1919.

The project, called the “Theremin Me” project, is part of the music production club at the school. The students plan on building several Theremins and are collaborating with Lancaster High’s Robotics Team 399, to pull from the team’s experience with manufacturing and electronics.

The school announced the music project to its local community as part of its Lancaster High Robotics Team 399’s annual robot rollout to show the efforts LHS has already put toward furthering STEM programs, and to display the partnership between the robotics team and the “Theremin Me” project.

The school also recognized AFRL and the benefits of the ENSPIRE program’s help in promoting STEM programs.

1st Lt. Harvey Hurst, the “Theremin Me” ENSPIRE program manager and an AFRL program manager, was asked to offer a few words as a representative for the ENSPIRE sponsorship and as the new mentor for Team 399.

“I have no doubt the team will continue to use these (ENSPIRE) funds to innovate and educate others on the importance of not only STEM, but STEAM as well; and their efforts of incorporating art into STEM played a key role in establishing the educational partnership agreement with AFRL.”

The AFRL Rocket Lab ENSPIRE program seeks to inspire innovation in students to become more involved in STEM curriculums by seeking exceptional and pioneering projects that develop the next generation of STEM activities in schools to take STEM programs to a new level in the Antelope Valley. Schools were required to submit their proposals to the AFRL Rocket Lab explaining how they would improve STEM in their classroom, their school or across the district. These proposals included a short write-up and a budget for the projects. The Rocket Lab has partnerships with 10 local high schools through the program.

Partnerships between the local community and the AFRL are extremely important, according to Kriss Vander Hyde, lead for the AFRL Rocket Lab ENSPIRE program.

“At the Rocket Lab, we recognize a great need for STEM talent to develop the advancements we need for Air Force technology dominance, said Vander Hyde. “ENSPIRE takes another step in paving the road for STEM growth and ensuring America’s reign as a technological powerhouse.  We believe that projects like ‘Theremin Me’ will inspire our students to take the career path that will shape our nation’s technology and our future.”