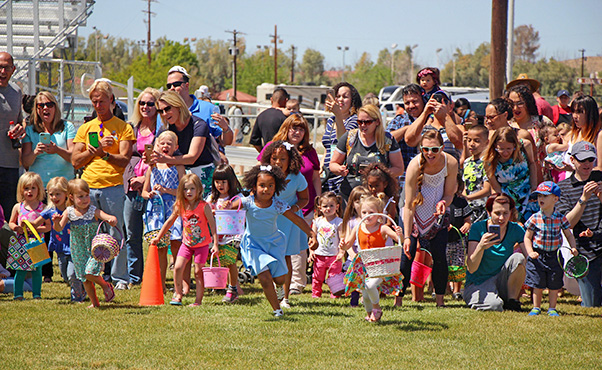 About 500 children were divided into five different age groups for the Easter Egg-stravaganza held April 15, 2017. Each group patiently waited their turn to run out on Wings and Roberts Fields and fill their baskets with candy-filled eggs – one of which had a ticket for a three-pound chocolate bunny. After all 8,000 eggs were collected, families stayed to enjoy complimentary hot dogs and cupcakes and enjoy the beautiful sunshine before the next event began.

“The original inspiration behind Easter Egg-stravaganza was to consolidate all the different Easter events on base into one event so that people who live off base, or are involved in other weekend activities, can come on base for one whole day of fun and not have to travel back and forth multiple times,” said Edison Ruland, the 412th FSS Community Activities director.

The day began at 9 a.m. at High Desert Lanes Bowling Center with “Breakfast with the Easter Bunny.” More than 200 people enjoyed pancakes, scrambled eggs, bacon, sausage and fresh fruit before bowling. For the families who weren’t able to bowl during the scheduled event time, the bowling center provided tickets in credit of over 450 games — three games per family — for them to come back and bowl at a later time. The Easter Bunny made a special appearance to take photos, dance and bowl with the children.

The fun continued over at Wings and Roberts fields with the Easter Egg Hunt. About 500 children were divided into 5 different age groups. Each group patiently waited their turn to run out on the field and fill their baskets with candy-filled eggs – one of which had a ticket for a three-pound chocolate bunny. After all 8,000 eggs were collected, families stayed to enjoy complimentary hot dogs and cupcakes and enjoy the sunshine before the next event began.

Easter Egg-stravangaza concluded at the Oasis Aquatic Center with the Underwater Egg Hunt. Parents swam with their children to help them collect the eggs on the surface of the pool, while the older children jumped into the deeper section to find the eggs that were sunk on the bottom. There was a surprise visit from the Underwater Easter Bunny who tried unsuccessfully to guard his eggs from the children above. Volunteers also staffed game stations around the pool, including Pin the Tail on the Bunny and an egg matching game. Each child left with a candy-filled treat bag.

By the time the day was over, the 412th FSS had given out 500 hot dogs, 375 cupcakes and 70 pounds of Easter candy along with countless smiles and laughter. Attendees were thrilled with how much fun their children had and how smoothly such a large event ran.

“I am very pleased that everyone at Edwards AFB came out to support the first Easter Egg-stravaganza,”said Ruland, “We’ve gotten some awesome customer feedback and look forward to bringing an even bigger and better event for 2018!”

Everyone who participated in Easter Egg-stravaganza is encouraged to submit an ICE comment card with their feedback on the event. The weblink to the ICE comment card system can be found on www.edwardsfss.com.