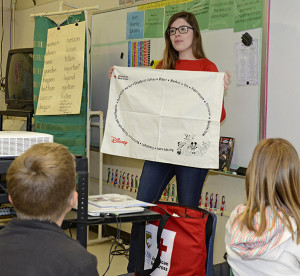 American Red Cross representative Haley Seibel talks to third-graders at Irving L. Branch Elementary April 11, 2017, about the Red Cross’ Pillowcase Project. Subjects touched on included managing stress during an emergency; what to do in case of a fire or earthquake; and what items the children should pack during an emergency in their pillowcase.

It was the third- and fifth-grade classes’ turn to learn about emergency preparedness with a return visit from the Red Cross April 11, 2017.

The Edwards Office of Emergency Management, 812th Civil Engineering Squadron, invited the American Red Cross to Irving L. Branch Elementary at Edwards Air Force Base, Calif., for part two of the Red Cross’ Pillowcase Project presentations. Branch third- and fifth-graders received a lesson in emergency preparedness with encouragement to take what they learned back to their families. Red Cross personnel already visited in January to conduct the training with the fourth-graders.

The Pillowcase Project is sponsored by The Walt Disney Company, which allows Red Cross volunteers to visit third- through fifth-graders around the region bringing them information and preparedness tools.

“Our goal with the Pillowcase Project is to teach children the skills they need to be safe and remain calm during emergencies,” said Haley Seibel, AmeriCorps member with the Disaster Cycle Services Department at the American Red Cross. “Through our partnership with Disney, we have been able to make it a really fun event for the kids. It isn’t meant to be scary; kids tend to be more afraid of what isn’t talked about or what they don’t understand. We hope that this will start a dialogue and help everyone in their households to think about and be better prepared for disasters.”

The students each received a preparedness toolkit, which includes a “My Preparedness Workbook” and a personalized pillowcase to build their personal emergency supplies kit. The children are able to put items in the pillow case they may need during an emergency as well as draw pictures of items and people on the outside. They also received a pledge certificate and an Air Force “Be Ready Kids!” activity book from Edwards AFB Emergency Management.

The one-hour sessions with the Red Cross volunteers and students were interactive, with the visitors calling upon the students to talk about what they know about emergencies and what they learned during the class.

According to the Red Cross, more than 515,000 students have been taught preparedness skills through the Pillowcase Project.

“The Pillowcase Project is a now nation-wide program that began in Louisiana after Hurricane Katrina in 2005 and expanded with the help of Disney,” Seibel said. “My office coordinates preparedness education events for a territory that stretches from the San Fernando, Santa Clarita and Antelope Valleys, all the way up through Inyo, Mono and Eastern Kern Counties. In our territory, we have been able to educate over 2,600 children from dozens of schools and other youth organizations during this fiscal year.”

Read more about the different ways to prepare at www.beready.af.mil.