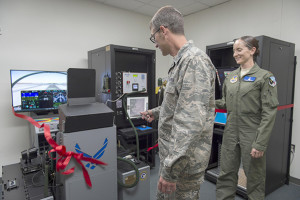 Pilots and aircrew members at Edwards Air Force Base, Calif., may be able to breathe easier knowing they don’t have to go to another base anymore for required hypoxia training.

A ribbon-cutting ceremony was held April 20, 2017, to introduce a new Reduced Oxygen Breathing Device and Hypoxia Familiarization Trainer as part of the aircrew flight equipment in Bldg. 1250.

The new system takes the place of an altitude chamber, which Edwards used to have when the SR-71 Blackbird flew here.  Since the hypobaric chamber closed over a decade ago, all aircrew have had to go to other locations to receive this training.

“All aircrew need to have this training once every five years and it is a grounding item; if they don’t have the training, they are grounded and cannot fly,” said Maj. Maggie Coppini, 412th Medical Group aerospace physiologist. “By having this device here at Edwards, we are providing a (local) ability to train our aircrew instead of having to send them temporary duty for this training. We will be saving the 412th Test Wing approximately $70,000 annually in TDY expenses by being able to provide the training ourselves.”

Coppini said F-35 and F-22 pilots have to complete hypoxia training once a year and a need was identified to have a trainer at Edwards. She presented the idea to the 412th Operations Group commander, Col. Scott Cain, who approved the purchase of the system.

People can experience hypoxia when there is an oxygen deficiency. In airplanes, this can happen with a loss of cabin pressure or equipment failure.

There are three components to the new training system. The Reduced Oxygen Breathing Device is used with the Hypoxia Familiarization Trainer, which is a quasi-flight simulator for pilots. The ROBD is also used with the Mission Crew Trainer, which is designed for non-pilot aircrew members such as load masters, test engineers and boom operators.

Coppini said the ROBD works by changing the composition of breathing air to mimic altitudes up to 34,000 feet, making the aircrew member hypoxic by giving less oxygen than is needed to maintain deliberate thinking and motor skills. The oxygen flows through an aviator mask worn by the pilot or aircrew member. 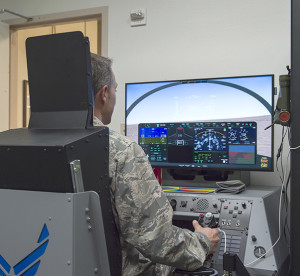 Col. Scott Cain, 412th Operations Group commander, tries out the new hypoxia trainer at the Aircrew Flight Equipment building April 20, 2017. The Reduced Oxygen Breathing Device will allow Edwards pilots and aircrew members to complete required training on recognizing their own unique symptoms of hypoxia and how to recover from it.

“The ROBD provides more realistic training than an altitude chamber because the aircrew will be doing tasks similar to what they’d be doing in flight such as flying to different headings and altitudes, responding to radio calls, processing numbers and cross-checking data, etc. Additionally,  Staff Sgt. Lynnette McCarrier, my Aerospace Physiology technician, can configure their oxygen regulator, stick and throttle in a way that most closely resembles their primary aircraft, so we can develop habit patterns that are applicable to their flight environment,” said Coppini.

The new system is designed to train aircrew on recognizing their own unique symptoms of hypoxia. Once they identify their symptoms, they initiate the appropriate emergency procedures and get on 100% oxygen to help their symptoms resolve and to land the aircraft safely (for pilots), according to Coppini.

“Hypoxia training is important so that aircrew can quickly and effectively recognize their symptoms, should they experience them in flight, and safely recover the aircraft so that everyone gets home safely.”

Coppini added that ROBD training is safer than an altitude chamber because there is no risk of rupturing an eardrum or having sinus blocks. She also said the new system is more cost-efficient to maintain.