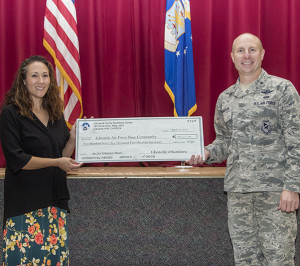 Brig. Gen. Carl Schaefer, 412th Test Wing commander, and Megan Rosario hold up a giant check showing how much volunteering has helped Edwards. Volunteer efforts at Edwards in the past year totaled 23,784 hours, which translated to a dollar amount totaling $561,517.

The yearly event is a chance to recognize those in the community that go above and beyond to help out. The ceremony shed light on how much the base depends on volunteerism.

“The purpose of the ceremony is to honor and say thank you to all of our volunteers that sacrificed their time and efforts to make Edwards AFB a great place to work, live and play,” said Glen Arola, 412th Force Support Squadron Volunteer Program manager. “Without volunteer support many units and organizations on Edwards would not be able to function. Organizations such as youth sports, base chapel, Airman and Family Readiness Center, the Airman’s Attic, APET, Retiree Activities Office and many others rely on volunteers like those here today.”

The theme for this year was “Service Unites.” Volunteer efforts at Edwards in the past year totaled 23,784 hours, which translated to a dollar amount totaling $561,517, according to Arola.

“Our mission here at Edwards is to test and evaluate weapons systems to ensure war-winning combat capabilities; that’s what we do,” said Brig. Gen. Carl Schaefer, 412th Test Wing commander. “When you take part as a volunteer, you’re stepping up, whether you know it or not. When you’re doing that thing with the Boy Scouts or the Girl Scouts, or tutoring that student, you’re actually stepping up for your nation and that is a huge deal. It is very meaningful because you’re stepping up and volunteering to take part in the mission of national security.”

More than 120 people were in attendance to honor the volunteers who received certificates of appreciation and a catered lunch. This year’s guest speaker was Dr. John Porter of the Palmdale School District. He is the assistant superintendent for Special Education and Student Services. 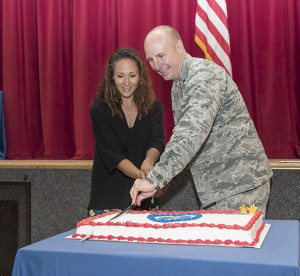 Each year at the ceremony, one individual is presented with the Air Force Volunteer Excellence Award for long-term volunteerism that has positively impacted military installations or their surrounding communities. Unlike the quarterly and annual volunteer service awards, the Volunteer Excellence Award can only be received once in a lifetime. This year’s recipient is Megan Rosario.

Rosario is a member of the Edwards Officers’ Spouses Club and of the Parent Teacher Organization for Branch Elementary. She has also volunteered at the base chapel and as a teacher’s aide.

“The Volunteer Excellence Award is a one-time award given to an individual who has done volunteer service impacting not only the base, but the outlying community over an extended period of time. Megan was truly deserving of the prestigious award,” Arola said.

Both Schaefer and Arola iterated that volunteers are vital to the base community and each volunteer is special to the wing and worthy of the community’s “utmost recognition.”