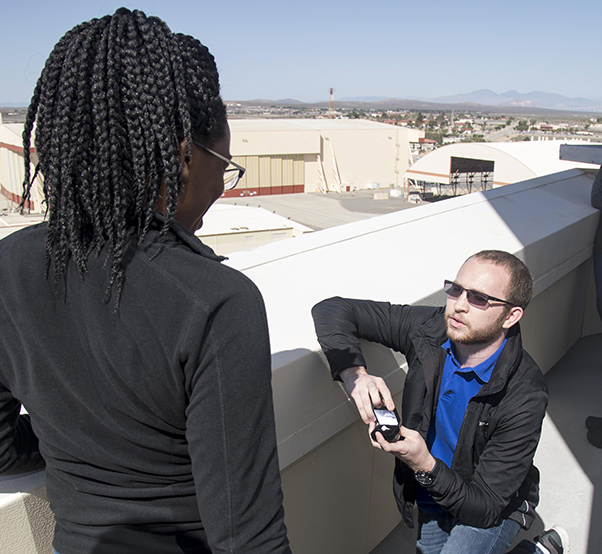 Daniel Ciolkosz, 775th Test Squadron, gets on one knee to propose to Amarachi Egbuziem, 772nd Test Squadron, at the Edwards control tower April 19, 2017.

Edwards Air Force Base, Calif., is known as the premier location for improving today’s military aircraft and the development of the aircraft capabilities of tomorrow, which makes U.S. air power second to none.

However, when it comes to love and romance, Edwards might not be first on most people’s list.

That may have changed April 19, 2017, when two members of Team Edwards decided to tie the knot high above the Edwards flightline.

Amarachi Egbuziem, 772nd Test Squadron, was on a tour for new Edwards engineers. The outing takes the engineers around base to see and learn about the different facilities. Part of the tour is getting a chance to visit the Edwards control tower for a bird’s eye view of the base. That’s where Daniel Ciolkosz, 775th Test Squadron, surprised Egbuziem with a ring and marriage proposal.

“It looks over the whole base and surrounding area. It seemed like the best spot on base, which added to the surprise,” said Ciolkosz. 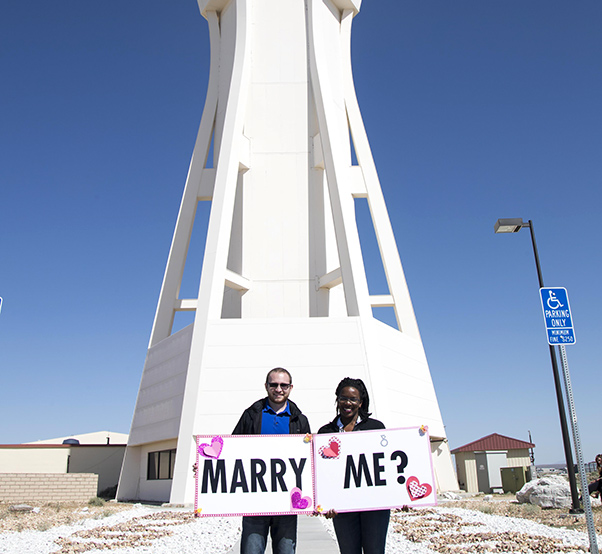 The two engineers met five years ago while students at Fresno State. As fate would have it, the couple both found jobs at Edwards.

“I really appreciate the tower allowing me to do this, as well as the (aerial) photographers for helping me make it special. Everyone was willing to help me make that day very special, and we will never forget how kind they all were,” said Ciolkosz.