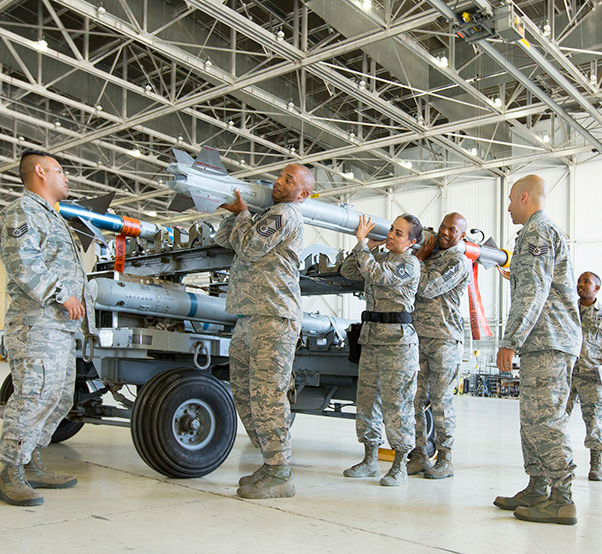 Chief Master Sgt. Todd Simmons, 412th Test Wing command chief, was invited to Hangar 1600 May 11 to try his hand at some weapons loading.

The chief and crew were given a weapons academics lesson, then briefed about specific safety requirements and emergency procedures in case of a drop, collision or fire involving the weapon. The crew was then called to attention by Fernandez and off they went to load the munition under the strict guidance and control of Staff Sgt. Christopher Provost, Staff Sgt. Ernesto Sierra, Staff Sgt. Jason Cabrera and Senior Airman Travis Dougherty from 412th MXG Weapons Standardization. 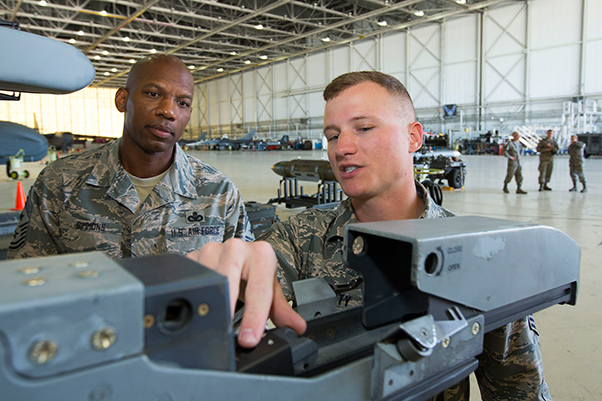 The crew wasn’t certified, but they gave it all their best, loaders in attendance said. They added that Simmons said he likes to get out and experience what goes on in the 412th Test Wing first hand, and what better way to accomplish this with a little bit of weapons loading.

First sergeants in attendance got in on the action as well. Master Sgt. Venessa Brown, Master Sgt. Michael Anthony and Tech. Sgt. William Newell from the 412th Aircraft Maintenance Squadron, loaded an Mk-82 500-pound bomb with a manually operated lift truck, or MOLT. The MOLT is used to load bombs downrange if there is no fuel or other powered lift trucks available. Brown said that this would count as her daily workout as the MOLT is very manual indeed.