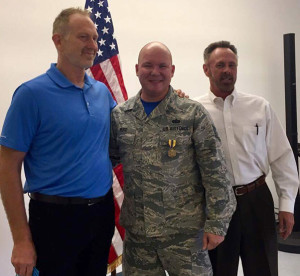 Tech Sgt. Michael Burd gets a community send-off at Edwards Air Force Base, Calif., standing with Antelope Valley businessmen Harry Engel and Kevin Sanders, who founded Beers For The Brave.

It takes a confident man to climb into a pointy hat with bells on it and paste on pointy ears … and pull on pointy shoes and candy cane striped stockings.

But if that is what it takes to cheer up some very senior veterans at the William J. “Pete” Knight Veterans Home in Lancaster, Calif., then Air Force Tech. Sgt. Michael Burd was up to the mission tasking.

Burd would round up airmen and NCOs from Edwards, along with some military spouses and they would head over to the veterans home, bells ringing bells and gifts in hand. It was a little holiday magic right out of Holiday Inn.

On May 12, about 100 of Burd’s brother and sister airmen turned out at the Chapel One Annex at Edwards to say farewell. So did some of the most senior NCOs, and Col. George Tromba, commander of the 412th Mission Support Group.

Burd was awarded the Air Force Commendation Medal for the several years’ work he put in at the base, but there was more to it.

Civilians turned out, from Quality Assurance. Civilians turned out from the community and veterans too. Making presentations and giving their respect and thanks to Burd there were representatives from the Patriot Guard Riders, and American Legion Riders. Danny Bazzell, a seasoned legislative aide delivered a joint resolution from the State Assembly and Senate representatives, Assemblyman Tom Lackey and Sen. Scott Wilk.

The event was even catered by an honorary Edwards Air Force Base commander, Domingo Gutierrez, who has probably cooked for more space shuttle crews returning from space than any service branch master chef.

Honorary challenge coins were handed over from groups as disparate as the Marine Corps youth group Devil Pups, and the U.S. Army Brotherhood of Tankers.

“It’s quite a turnout for an E-6,” said Chief Master Sgt. Daryl Baldosser, 412th Mission Support Group superintendent. “It doesn’t happen that often for a tech. sergeant, but Burd is a special guy.”

Burd made a practice of his passion, reaching out to community groups as varied as the American Legion to Beers For the Brave, an informal civilian businessman’s association that arranges ceremonial, complimentary brew fests for the troops.

“We are a better community for the time you had here,” said Antelope Valley businessman Harry Engel. “We’re going to miss you.”

Friends from the community included Army and Air Force veterans, Marines, Navy, and the Coast Guard.

“It’s been great having you here,” said Dave Corbin, president of the Patriot Guard Riders. Corbin served in the Coast Guard in the Vietnam War era.

Another senior NCO, Senior Master Sgt. Adam Pawelek of the 412th Aircraft Maintenance Squadron, made an unusual appraisal for one of rank senior to the more junior NCO.

“I learned a lot from you,” he told Burd.

During Burd’s years at the base, he helped to build the Chapter 1328 of the Air Force Sergeants Association into a force for community good. They visited veterans homes, served food at community events, even participated in a clean-up of the Los Angeles River.

For Burd, with roots in Arkansas, it was a matter of growing family connections in community. As a boy growing up his father’s construction firm, work took him all over the country through a series of moves.

“To tell you the truth, Edwards is the longest time I have ever spent in one place,” Burd said. “You are all like family to me, and family is what it’s all about.”

Later in the evening, at the annual mixer for the Edwards Civilian Military Support Group, Brig. Gen. Carl E. Schaefer, who commands the nation’s premier flight test base, said, “I am glad Tech. Sergeant Burd got a great send-off. He deserves it.”