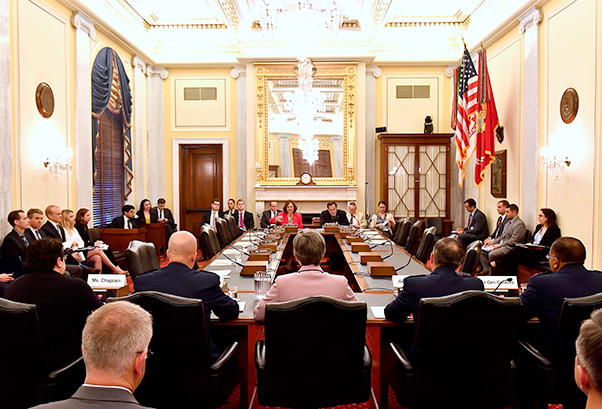 Air Force Secretary Heather Wilson, Air Force Chief of Staff Gen. David L. Goldfein, Gen. John Raymond, the Air Force Space Command  commander and Lt. Gen. Samuel Greaves, the Space and Missile Systems Center commander, answered questions about the Air Force’s current space capabilities and those needed for the future. The team presented the senators with information as to the department’s plan for acquiring future and updated space systems to meet the evolution of space as a warfighting domain.

“It’s obvious, but it’s probably worth repeating, that the U.S. is heavily dependent on space, and (our adversaries) know it is a vulnerability,” Wilson said. “In any conflict, space will be contested – and we haven’t always assumed that in the past. There’s been a change in culture – a change in planning and training going on in the United States military because we cannot take space dominance for granted. While there is a lot more to do, I’ve been initially pleased by some of the things I see and what the Air Force is doing to improve training, to identify gaps and to experiment with new concepts of operations. Particularly in the last 18-24 months, there’s a great deal that is going on with respect to addressing the needs of the nation to be able to prevail in space.”

More than 80 percent of the Defense Department’s space actions are handled by the Air Force, and the service views space as one of its core missions.

“Space superiority, like air superiority, is not an American birthright – it requires vigilance and action,” Goldfein said. “We have many more steps ahead of us, but America’s Airmen remain committed to evolving our space organization, strategy, requirements, architecture and forces to adapt…and ensure we gain and maintain space superiority.”

The Air Force has built upon 60 years of space operations by normalizing, integrating and elevating space, and streamlining decision-making for the enterprise. Currently, the Air Force is in a strategic shift from treating space as a benign domain from which the service monitors, senses and reports, to a warfighting domain in which it would fight – should a war start or extend into space.

According to Goldfein, the DOD and the Air Force are focused on four key areas within the space enterprise. First, solid strategy and policy must be in place for the Joint Chiefs of Staff to act upon. Next, the strategy and policy must be derived into a warfighting concept of operations that not only focuses on joint war fighting, but also integrates space across each warfighting domain. From the concept of operations comes solid acquisition requirements.

“We have to acquire at a pace that allows us to be faster than our adversaries who are all investing in ways to take away our advantage,” Goldfein said. “And the final element is how to organize, train, equip and present ready forces so the combatant commander can fight should a war extend into space.”

According to the AFSPC commander, space must be on the same level of acquisition decision authority – with deliberate oversight of execution – as each of the other warfighting domains.

“Operationally, we’re very sound – we’re the world’s best space forces, and that shouldn’t be lost to anybody,” Raymond said. “I do think though…should the domain become a contested domain, we have to have the ability to move fast. And that’s been one of my focuses – to make sure we have the operational policies, processes and procedures, and the acquisition capabilities to move fast.”

This was Wilson’s first Congressional hearing since swearing in as the 24th Secretary of the Air Force.