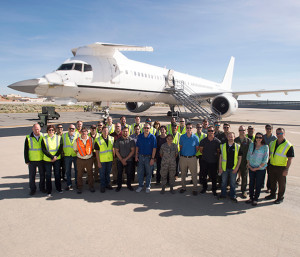 Members of the F-22 Flying Test Bed team pose for a photo in front of the highly modified Boeing 757 May 3. The FTB routinely flies with real Raptors both at Edwards and Nellis Air Force Base, Nev., in order to gain an early look at F-22 mission software before the software is released to developmental flight test, mainly at Edwards. The FTB can fly up to 30 crewmembers.

From time to time, the F-22 Raptor Combined Test Force at the 411th Flight Test Squadron at Edwards Air Force Base, Calif., gets a visit from an old friend.

A highly modified and instrumented Boeing 757 called the F-22 Flying Test Bed is an F-22 avionics laboratory. The experimental FTB is the very first Boeing 757 ever produced and has been retrofitted in order to perform flight test of F-22 avionics and sensors in an open-air, operationally representative environment.

The FTB routinely flies with real F-22 Raptors both at Edwards and Nellis Air Force Base, Nev., in order to gain an early look at F-22 mission software before the software is released to developmental flight testers, mainly at Edwards.

The FTB visited earlier in the month to examine the F-22 Raptor program’s upgraded mission software.

“This particular FTB deployment provided an excellent training opportunity for the FTB test team, as well as members of the F-22 CTF, while reducing risk to the F-22 3.2B (software) program by allowing us to have an early look at some prototype mission software planned for the final 3.2B software delivery,” said Rachel Kitzmann, Boeing Agile Integration Laboratory F-22 lead test director. “Our F-22 mission equipment is completely segregated from the 757 flight controls, so we can fly with prototype software that has not gone through a formal Equipment Operational Flight Clearance process. This allows us to have an early look at developmental software and problem fixes prior to release to the 411 Flight Test Squadron here at Edwards.”

Kitzmann added the FTB has the ability to change software loads real-time during flight, which allows the test team to test multiple configurations during early developmental testing. The fact that all of the mission equipment is housed in a 757 means that Boeing test engineers, F-22 test pilots and other F-22 customer representatives can be present on board and witness the flight test in real time. Additionally, the 757 can fly approximately a seven-hour sortie, which is far longer than a typical F-22 flight test mission, she said. 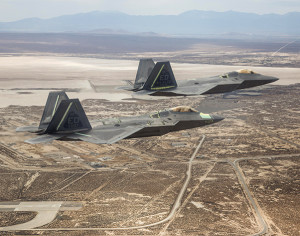 “The FTB saves money and reduces the F-22 modernization timeline,” said Kevin Sullivan, 411th FLTS F-22 avionics lead. “It provides risk reduction because it’s easier to fly, fix, fly more quickly instead of having software certified and loaded into an actual F-22. It allows us to look at the avionics software in an F-22 representative hardware and software environment and is capable of acting like an F-22, which can integrate with our F-22s here during test sorties.”

When not in flight, the FTB is connected to Boeing’s Agile Integration Ground Laboratory, which allows the company to add additional hardware, instrumentation and test equipment in order to perform system-level integration and development testing of the F-22 mission systems. The F-22 FTB has a unique wing above the flight deck that houses the same sensors as on a Raptor.

Kitzmann said this last mission to Edwards was the final flight the FTB took out of Boeing Field in Washington where it had been based since 1999. After leaving Edwards May 5, the FTB headed to its new home in St. Louis, Mo.