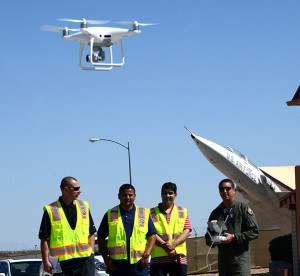 The diminutive, but increasingly useful, quadcopter was put to another challenge June 2, 2017, when it flew over a small building near the Edwards Air Force Base, Calif., flightline to give members of 412th Civil Engineer Group an idea of its capabilities as a building inspection tool.

With some assistance by the 412th CEG, the Emerging Technologies Combined Test Force here flew a series of sUAS – small unmanned aerial system – flights over the building to evaluate the feasibility of the sUAS to do roof inspections for CE, and to evaluate the performance of the sUAS quadcopters themselves. The first flight was done by a machine that was previously tested for aircraft inspections, and was followed by a flight test of a recently acquired and mostly untested sUAS.

“While roof inspections are being accomplished using these and other similar systems, our unique issue is the proximity to the flightline environment,” said Maj. Danny Riley, the director of the Emerging Technologies Combined Test Force. “It’s a continuation of the other feasibility studies we have been doing over the last several months to demonstrate the capabilities for USAF use
A second quadcopter, with more advanced instrumentation and a higher-quality camera system was tested next.

As the drones passed over the building, Michael Warren, an engineer technician with the 412th CEG, verbally guided pilot Danny Riley to the features on the roof of the building they would inspect.

“Some advantages this new and innovating technology could bring to CE is it can be used for locations that are hard or unsafe for humans to get access,” Warren said. “Also the video and pictures can be saved as work evidence.” 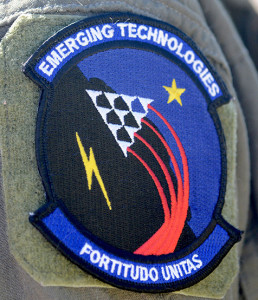 The Emerging Technologies Combined Test Force was created to promote innovation on Edwards. The unit is currently in charge of testing small unmanned aerial systems for use in a variety of situations.

The flights over the buildings were in addition to similar projects performed earlier in the week.

“The first (project) was to gather updated imagery and video detail of the old Raptor compound for Test Management Group, to supply to the contractor who is “re-building” it,” Riley said. We also acquired imagery required to build high-resolution 2D and 3D maps of the area, both for the contractor to potentially use for their planning, but also to demonstrate the capability.”

The second project was requested by the Army Corps of Engineers, and was very similar to the Raptor Compound.

“(The Army Corps of Engineers is) overseeing contractors working to remove debris on South Base, and wants regular (every four to six weeks) imagery to evaluate the progress of the work.” Riley said. “We took high overhead shots, as well as the same type of imagery to build 3D maps, which will hopefully allow volumetric estimates that will help their data collection.”

Riley said his CTF will the roof inspection video and the 3D reconstructions and figure out any lessons learned before flying the third roof CE requested.

“Then we’ll make recommendations on what works well and what else may be needed,” he said. “We already know that we need a thermal/infrared camera to do the inspections thoroughly.”

A small unmanned aerial system performs a roof inspection on Building 1401 near the Edwards flightline as part of a series of tests to determine its feasibility as an inspection tool for the 412th Civil Engineer Group. The tests were also flown to evaluate the performance of the aircraft’s systems.