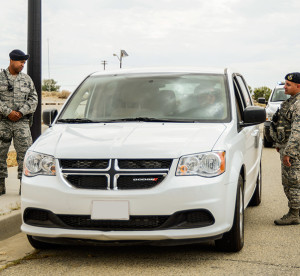 Airmen from the 412th Security Forces Squadron, Edwards Air Force Base, Calif., pull over a vehicle for speeding.

The community at Edwards Air Force Base, Calif., has a huge problem on its hands that security forces and others are looking to rectify.

There has been a large number of speeding violations cited within the past few months that has cast a dark cloud over the entire populace of the base.

As we all know, going excessive speeds in a motor vehicle is highly dangerous for others as well as yourself at any time. We as security forces members have to uphold the laws and standards regardless of affiliation or rank. The 412th Security Forces Squadron has put together a panel of highly motivated Airmen to figure out a course of action to curtail speeding on base.

The plan is to get everyone on base to realize that this is a serious offense and it will not be tolerated. We have ideas and plans in place to combat speeding and we are certain that the preventive actions we are taking will reduce speeding on base.

The 412th SFS has been vigorously patrolling the base to catch the offenders who are committing speeding violations. We have noticed an influx of tickets from Jan. 1-June 2 that is shocking to most.

We have accumulated a total of 232 traffic citations for speeding, which is definitely unacceptable by our standards. The hike in violations has come with many excuses such as tardiness to work, loss of concentration on their speed and lack of knowledge of speed limits in certain areas.

Regardless of the excuse or reason, speeding is unacceptable at any time. The safety risks are automatically amplified whenever you are operating a vehicle because of other drivers and pedestrians. When you take speeding into account there is even more of a hazard.

The stance that we are taking now is to eliminate the risk of injury, harm or damage to anyone, any property and to protect the entire base.

Knowledge of speeding is well documented and widespread throughout many circuits but we want people to really understand the risk that they are taking. Risk management is important to understand with simple things such as our daily routines.

Chief Master Sgt. Michael Young, 412th SFS, said, “I hope all test wing members remember to apply the same risk management principles to off-duty activities as they do on-duty tasks; every Edwards member is vital to the test wing mission.”

That is a stern message considering the repercussions that come with speeding, such as loss of driving privileges, administrative paperwork, extra duties and court time, which can affect your availability to the mission. Additionally, court-ordered fines can be costly.

Those are major factors to remember before you make that decision to speed.