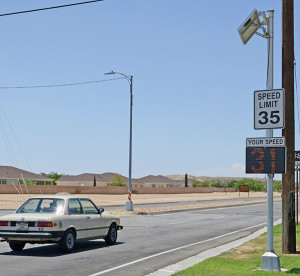 Signs like this one on Fitz-Gerald Blvd. serve as a reminder to motorists to maintain the proper speed limit.

The 412th Security Forces Squadron at Edwards Air Force Base, Calif., has been working vigorously to combat speeding on base over the past few months.

It’s a problem that was recognized and is currently in the process of being mitigated. We want safer roads for the entire base populace and the initiative that we have taken recently is paying huge dividends.

The amount of citations that have been issued is a direct sign of the increase in active patrols and vigilance by security forces patrolmen.

The astounding number of citations will hopefully serve as a deterrent for potential violators of traffic regulations and guidelines. In the first half of the year, 412th SFS issued 378 speeding citations with a peak of 104 in May.

It is our objective to limit traffic violations at all cost.

Our job as security forces members isn’t to hassle or inconvenience anyone, but if you are caught breaking the law then you run a chance at inconveniencing yourself.

We all have to remember the consequences and repercussions that follow our actions involving speeding such as vehicle accidents and damages, citations, revocation of driving privileges, court fees, serious injury or bodily harm, and worst case scenario, death.

The reality of this is harsh, but the message needs to be repeated and everyone needs to understand that speeding on base will not be tolerated.