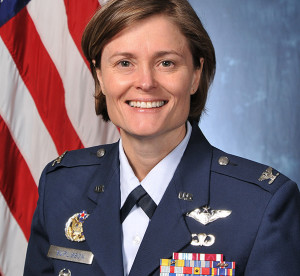 At the AFTC she will assist Maj. Gen. David Harris, AFTC commander, oversee a $31 billion enterprise of more than 18,000 military, civilian and contractor personnel across Edwards, Eglin Air Force Base, Fla., and Arnold Air Force Base, Tenn.

The AFTC provides developmental test and evaluation of experimental and research manned and unmanned air, space and cyber systems for military services, DARPA, NASA and international partners, in addition to operation of the U.S. Air Force Test Pilot School.

Following graduation, she stayed at Edwards and was assigned to the 416th Flight Test Squadron where she performed weapons and avionics flight testing on U.S. and foreign military sales F-16s. She then moved to the then 410th Flight Test Squadron at Plant 42 in Palmdale, Calif., where she served as a flight test engineer and flight commander for F-117 Nighthawk low observable and weapons testing.

Suplisson was later selected to study in France after receiving an Olmsted Scholarship. Following her assignment abroad, she worked at the Joint Strike Fighter Program Office and later was the F-16 Program element monitor in the Directorate of Global Power, responsible for the budget of the F-16 program at the Pentagon. From 2007 to 2009, she served as commander of the 846th Test Squadron at Holloman Air Force Base, New Mexico.

She earned her doctorate in aeronautical engineering with research in optimal aircraft trajectories for automatic ground collision avoidance systems in 2015 at the Air Force Institute of Technology. Suplisson led the department of aeronautics at the AFA from 2015-2016 and led the Unmanned Aerial Systems Center from 2015-2017, where she was responsible for all UAS research and UAS airmanship training at the academy.