A C-17 Globemaster III assigned to the 418th Flight Test Squadron at Edwards Air Force Base, Calif., air-launched a ballistic missile target over the Pacific Ocean north of Hawaii July 11, 2017. 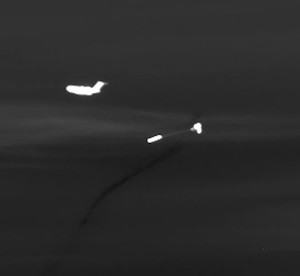 A C-17 assigned to the 418th Flight Test Squadron airdrops an intermediate range ballistic missile target as part of a Missile Defense Agency test July 11 over the Pacific Ocean.

“The 418th is proud to provide best-in-the-world, test airdrop support to the Missile Defense Agency,” said Lt. Col. Paul Calhoun, 418th FLTS commander. “We have cultivated unique airdrop capabilities and a relationship over the past few years culminating in this recent successful test.”

An MDA press release said this was the 14th successful intercept in 14 attempts for the THAAD weapon system. The THAAD element provides a globally-transportable, rapidly-deployable capability to intercept ballistic missiles inside or outside the atmosphere during their final, or terminal, phase of flight. The MDA says THAAD is strictly a defense system. The system uses hit-to-kill technology whereby kinetic energy destroys the incoming target. The high-altitude intercept mitigates effects of enemy weapons before they reach the ground.

The 418th FLTS has supported these MDA tests over the years.

“The 418th is the only organization on Earth capable of airdropping MDA’s largest and most capable ballistic test missiles providing a vital examination of U.S. strategic defense assets,” said Calhoun. “These flight test profiles are extremely demanding requiring countless hours of careful planning and build-up testing over the last year. All of that is worth it though when you watch that missile drop out of an airplane and then launch into space, particularly knowing that the test is supporting the noble end goal of protecting the homeland.”

Soldiers from the Army’s 11th Air Defense Artillery Brigade conducted launcher, fire control and radar operations using the same procedures they would use in an actual combat scenario. Soldiers operating the equipment were not aware of the actual target launch time.

The successful demonstration of THAAD against an IRBM-range missile threat bolsters the country’s defensive capability against developing missile threats in North Korea and other countries around the globe and contributes to the broader strategic deterrence architecture, said the MDA release.