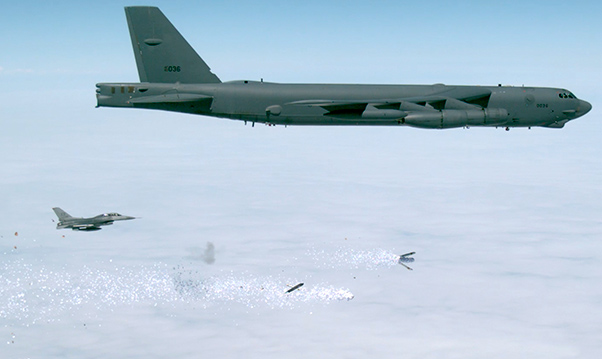 A frame from a video shows the PDU-5/B leaflet bomb activating and dispersing the leaflets.

An important part of U.S. military operations overseas is communicating with the local population. This can be done in a number of ways including something as simple as distributing leaflets.

In psychological operations, leaflets with messages are often dropped from aircraft in order to reach a wide area.

Testers from the 419th Flight Test Squadron at Edwards Air Force Base, Calif., are looking to see if B-52 Stratofortress bombers can accomplish this task.

The squadron recently completed two successful sorties where a B-52 released eight PDU-5/B leaflet bombs over the Point Mugu Sea Test Range and eight more over the Precision Impact Range Area on Edwards.

“We are primarily looking to see safe separation from the external Heavy Stores Adapter Beam,” said Kevin Thorn, 419th FLTS B-52 air vehicle manager. “We are ensuring that the bombs do not contact the aircraft, and/or each other, creating an unsafe condition. Additionally we are tracking the reliability of the bomb functioning.”

The PDU-5/B is a new-use or variant of an older Cluster Bomb Unit. The original designation for the weapon was the MK 20 Rockeye II, SUU-76B/B, and/or CBU-99/100. The designator changes depending on the type of filler used in the bomb, said Thorn. Having leaflets as a filler designates the bomb as a PDU-5/B. 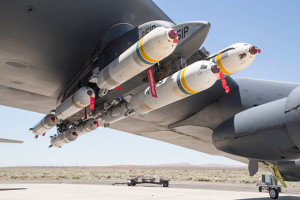 A B-52 Stratofortress assigned to the 419th Flight Test Squadron at Edwards Air Force Base, Calif., with eight PDU-5/B leaflet bombs underneath the left wing. The PDU-5/B is a repurposed Cluster Bomb Unit used to release leaflets (paper cut into a specific size). Leaflets are generally dropped during U.S. military psychological operations overseas. When released from the aircraft, a fuse is set to a certain time to tell the bomb to detonate and release the leaflets.

According to the Air Force, PDU-5/B canisters can deliver about 60,000 leaflets and were deployed in Operation Iraqi Freedom before any Air Force munitions began hitting targets in Baghdad, Iraq.

The dispenser bomb can be dropped from helicopters and fighter jets, and now the 419th is trying to see if the B-52 fleet can be used as well.

“The PDU-5/B is just another tool that the B-52 uses in its vast and reliable tool box,” said Earl Johnson, B-52 PDU-5/B project manager. “Without the capability to carry PDU-5s on the B-52 aircraft, the impending shortfall on leaflet dispersal capability will jeopardize Air Force Central Command information operations.”

Johnson said testing the PDU-5/B on the B-52 is complete for now.  The program is forecasted to return at a future date to test PDU-5/B releases from the B-52’s internal weapons bay.