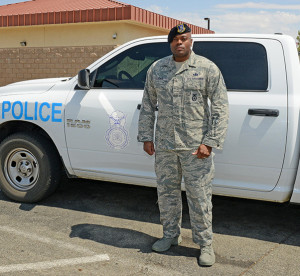 After 16 years as a U.S. Air Force Security Forces member, Master Sgt. Maurice Lucas II had never needed to pull his duty weapon out of his holster while serving at his home base.

Then Tech. Sgt. Lucas was working as flight chief in charge of the 412th Security Forces Squadron’s patrols when he got a call from the law enforcement desk around 6 p.m. about a man who was possibly armed and barricaded in a housing area at Edwards Air Force Base, Calif. The call also said the subject had possible “suicidal ideations.”

Lucas had to respond from the Air Force Research Laboratory facilities far from main base and radioed ahead to his fellow 412th SFS defenders to secure the area.

“I high tailed it back to main base from the North Gate. When I arrived on scene it was sort of a cluster,” Lucas said. He got specific information from the subject’s wife, who was the one who made the call to Security Forces. She told Lucas her husband had been drinking, was really irritated, that he had a pistol and a rifle and was going to try to commit suicide.

After getting the exact address from the spouse, Lucas positioned his troops and then parked his vehicle  two houses away from the subject’s house behind an “old rusty truck” that was on the street. After exiting his vehicle, he saw the subject poking his head in and out of the garage looking at him.

“I pulled my duty firearm for my safety and started verbally challenging the individual, and that’s when he came out of the garage. He didn’t have a weapon on him that I could see. He was talking on his cell phone. I didn’t know if he had a weapon in his waistband or anything of that sort. He started yelling at me.”

In a neighboring yard a parent and two children were playing.

“The subject yelled to the father and told him to immediately take his kids inside so I thought, ‘This means he is really adamant about either suicide by cop or he’s going to pull his firearm and do severe damage,’ so I kept on challenging him. He kept on coming at me and he wasn’t listening to anything I was saying to him. At this point my patrols came up behind me and they had their M4s drawn on the subject. I kept repeating for him to get down on the ground, stop, halt, but nothing.”

Lucas said the man kept approaching him, yelling and cursing and got within Lucas’ “reactionary gap,” which is a tactical term for a distance at which a law enforcement officer still has time to react before a suspect or subject is upon the officer.

“I made a conscious decision, knowing that I had backup, to secure my firearm (in the holster) and go hands-on at that point. I went hands-on and placed him in a prone position and then one of my guys came in and assisted with the apprehension.”

Lucas added that once the man was handcuffed he started yelling, “Hey, you guys are supposed to kill me. I’ve seen this in the movies done plenty of times before.”

Upon searching him, the man didn’t have a firearm on him but had two boxes of .40 caliber ammunition in his pockets.

Lucas went to check the garage where he saw the man was poking his head out.

“There was a couch pulled to the wall and he had his .40 caliber XD pistol with a round in the chamber and multiple rounds and magazines right there ready to go. His car was backed into the garage with the trunk open. Right next to his trunk was a stool with a quarter bottle of Jameson left and a glass he had been drinking out of, so he was obviously intoxicated.”

Lucas then noticed the car’s trunk was open, as he took a look inside he discovered an M4 assault rifle with an M68 red dot sight that was turned on. There was a round in the chamber with the selector switch moved to the fire position with a 40-round magazine attached and about six additional 30-round magazines loaded.

“He also had a shotgun with a round in the chamber, fully loaded with a grocery bag full of shotgun shells ready to go,” said Lucas.

“I’m sure if we didn’t catch him right then and there, with the element of surprise we had, that it could have been a totally different scenario. It could’ve been a nightmare.”

For his actions that evening, Lucas was awarded his fourth Air Force Commendation Medal Aug. 2, 2017.