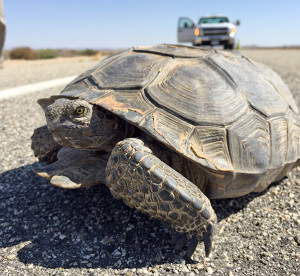 A desert tortoise sits on Mercury Boulevard at Edwards Air Force Base, Calif.

The desert tortoise is one of the many animals found at Edwards Air Force Base in California’s High Desert.

Listed as threatened under the federal Endangered Species Act of 1973, desert tortoises are protected from unwarranted harassment or injury.

Tortoise signs have been placed in various locations throughout the base over the years due to reoccurring desert tortoise sightings along roads, near buildings and under parked cars where desert tortoises seek shelter from the elements. People working or living on Edwards are encouraged to check under and around vehicles prior to moving their vehicles, especially if parked near open desert, according to Zimmerman.

If a desert tortoise is seen and not in immediate danger, people are advised not to touch the animal and monitor the animal until it reaches safety. Environmental Management should be contacted immediately if a tortoise is seen, whether in danger or not. Only authorized and trained people are allowed to touch a desert tortoise in non-emergency situations. Unauthorized handling could result in a $50,000 fine and jail time.

Zimmerman said desert tortoises are particularly active March through May and again from September through October. However, desert tortoises can be active at any time throughout the year, especially during and after rainfall.

Anyone who encounters a desert tortoise in distress should call Environmental Management at 661-277-1401.