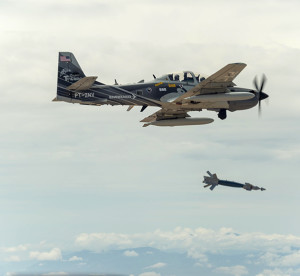 An Embraer EMB 314 Super Tucano A-29 experimental aircraft flies over White Sands Missile Range, New Mexico, Aug. 4. The A-29 is participating in the U.S. Air Force Light Attack Experiment (OA-X), a series of trials to determine the feasibility of using light aircraft in attack roles.

Who better to try out new aircraft than flight testers from Edwards Air Force Base, Calif.

Earlier this year, the Air Force established vendor parameters in the initial invitation-to-participate in its Light Attack Experiment. Private industry members were asked to propose aircraft that could potentially meet an Air Force need for a low-cost attack capability that is supportable and sustainable.

During the first week of the experimental flights in August, Air Force pilots flew basic surface attack missions in Textron Aviation’s AT-6 Wolverine turboprop, as well as in Sierra Nevada Corp. and Embraer’s A-29 Super Tucano.

Scenarios during the experiment were designed to highlight aspects of various combat missions such as close air support, air interdiction, combat search and rescue and strike coordination and reconnaissance, according to the Air Force. The experiment included the use of weapons generally used on fighter and attack aircraft to evaluate the participating aircraft’s ability to execute traditional counter-land missions.

Two Edwards pilots got to fly the AT-6, which included one experimental flight each where rockets, .50 caliber machine gun and BDU-33 practice bombs were employed.

“416th pilots were selected based on the desire to have test pilots evaluate handling qualities, performance, and pilot-vehicle interface characteristics of the experiment aircraft,” said Maj. Ryan Fancher, 416th FLTS assistant director of operations. “This evaluation was completed in conjunction with separate flights by operational test pilots to get a fairly comprehensive look at the aircrafts’ capabilities and mission suitability.” 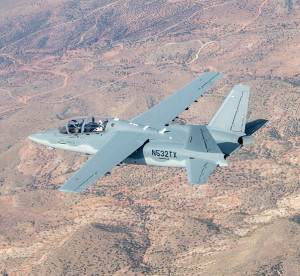 “After the experiment sortie, each pilot submitted a pilot report and a separate survey in order to capture pertinent handling qualities, performance and (pilot-vehicle interface) aspects of the aircraft,” Fancher said.

The 416th FLTS’ participation is part of the Air Force Test Center’s larger involvement in the experiment.

Fancher said prior to travelling to Holloman, the 416th FLTS team conducted pre-arrival studies.  Once at Holloman, one day of academics was accomplished prior to a familiarization sortie, which covered local area procedures and basic operation of the aircraft and its avionics. During the familiarization sortie the test pilot flew from the front seat with an instructor pilot from the aircraft manufacturer in the back seat. The test pilots would later fly the experimentation flight conducting test points and weapon deliveries with the company instructor pilot in the back seat to assist with flight duties. 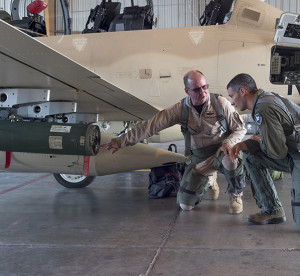 “It was enjoyable to take part in the opportunity to fly and assess a new aircraft, particularly when it has the potential to positively enhance future war fighting capabilities,” said Fancher.

Pilots will continue to fly the four aircraft through a range of combat mission scenarios during the live-fly experiment to evaluate each platform’s military utility. The live-fly experiment is part of a broader Air Force effort to explore cost-effective attack platform options under the Light Attack Experimentation Campaign run by the Air Force Strategic Development Planning and Experimentation Office at Wright-Patterson Air Force Base, Ohio.