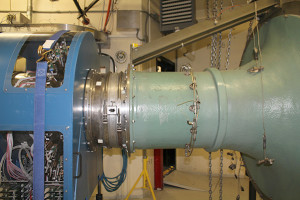 An AEDC test team and members of the U.S. Air Force Academy (USAFA) partnered together recently at the Academy’s F109 turbofan test facility to apply swirl distortion to determine engine response in terms of aeromechanics, operability and performance. In July 2017 testing occurred using a fully functional and automatic swirl generator prototype to determine the response of the F109 engine to swirl with and without pressure distortion. Pictured here is the swirl generator, the blue portion at left, connected to the bellmouth.

An AEDC test team and members of the U.S. Air Force Academy (USAFA) initiated a project in 2011 at the Academy’s F109 turbofan test facility applying swirl distortion to the determination of engine response in terms of aeromechanics, operability and performance.

In June of this year, the AEDC test team returned to the F109 test facility and conducted a test using a fully functional and automatic swirl generator prototype to determine the response of the F109 engine to swirl with and without pressure distortion.

A set of pre-test predications were also computed that aided in test planning and provided guidance in the test process to determine the best expenditure of test resources.

Dr. Milt Davis, Technology Transition Manager with the AEDC Test and Analysis Branch, explained that the Society of Automotive Engineers (SAE) S-16 Committee, also known as the Turbine Engine Inlet Flow Distortion Committee, has been providing methodologies and standards for the aircraft and engine community to use in testing and analyzing inlet distortion effects on gas turbine engines for over 30 years.

“They’ve been largely focusing on the performance and operability aspects of inlet-engine compatibility,” he said. “Many gas turbine installations can generate significant flow angularity or swirl as well as total pressure distortion at the Aerodynamic Interface Plane. These issues prompted the SAE S-16 Committee to embark on the development of a methodology for considering swirl as part of the inlet-engine compatibility assurance process.” 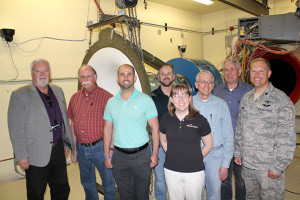 AEDC and the Air Force Academy partnered together to test engine response to swirl distortion to better serve the turbine engine community by helping to identify the role that swirl might play not only in stability margin loss but in high cycle fatigue failures.

At the inception of the F109 engine test project, the AEDC Technology Program was engaged in the development of a swirl distortion generator for use in direct-connect engine tests. The swirl generator development process culminated in the validation of a fully-functional prototype. During validation tests, the prototype demonstrated the ability to rapidly establish pre-determined swirl patterns. The ability to remotely set a large number of swirl patterns enabled the comprehensive 2017 F109 engine test.

“In parallel, AEDC test teams also embarked on the application of a turbine engine numerical simulation capable of predicting the response to inlet distortion, known as the Parallel Compressor Simulation,” Davis said.

He mentioned several different organizations are to thank for the recent efforts at the USAFA F109 test facility.

“The test was supported and partially funded by the Propulsion Integration Flight 412th Test Wing, Edwards AFB, and the Compressor Aerodynamic Research Laboratory at the Air Force Research Laboratory,” Davis said. “Both of these organizations have interest in the methodologies developed from the analysis of the test results. Without the added funding from these organizations to what was provided by AEDC Technology Direct Budget Authority, the development of the prototype and the testing at the Academy would not have happened.”