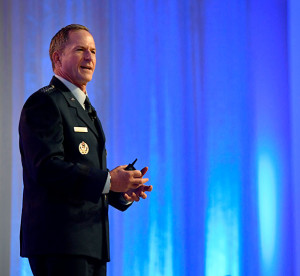 “A year ago I came out on this stage and laid out for you three focus areas,” Goldfein said. “Big rocks, we call them, because they’re big and they’re heavy, and it’s going to take all of us lifting together to get them moved. By design, it should not be surprising to you that they fit perfectly and are nested under our five [Air Force] priorities.”

Three teams, led by a brigadier general and command chief master sergeant, reviewed each of these efforts over the course of nine months and reported back on what they learned, and the actions they’ve taken to date, setting the table for the important work ahead.

Air Force senior leaders agree the first priority is to restore readiness and drive innovation, which Goldfein said begins at the squadron, the heartbeat of the Air Force.

One overwhelming truth came out of the review done in the last nine months…barriers to success need to be removed, Goldfein said.
“How do we ensure we’re not doing additional duties that are taking up essential time and actually not adding to the readiness of the squadron,” Goldfein asked.
Air Force senior leaders are minimizing computer-based training and adding commander support staffs and civilians back into the squadrons to take on some of those roles. They are also reviewing all Air Force instructions and empowering commanders to maneuver and make decisions. In turn, Goldfein encouraged wing commanders to let squadron commanders make these decisions.

Ultimately each of these changes is part of the work the Air Force is doing to push decision authority back to the lowest practical level.

With the Air Force being part of every mission, the joint team executes, strengthening joint leaders and teams is vital to mission success, Goldfein said.

As military leaders look at operational war plans, the common theme across all the possible military campaigns is air and space.

“As we strengthen how we build joint leaders and develop exceptional leaders for the future, it’s important that we acknowledge the inherently joint nature of air and space power,” Goldfein said. “We must train Airmen to bring air, space and cyber capabilities together with all the other elements of a strategic military campaign.”

This will enable Goldfein’s responsibility of organizing trained and equipped ready forces for a combatant commander as the Air Force plans to deploy Airmen in teams of three beginning Oct. 1, 2017.

Goldfein also highlighted the importance of seeking ways to connect capabilities rather than focusing on individual platforms in future warfare. This requires agile and resilient networks.

“We are transitioning from wars of attrition to wars of cognition,” Goldfein said. “It forces us to ask different questions of industry. Now we are starting the dialogue with…does it connect … and … can it share. We’re putting together a wargame that’s focused on these concepts.”

The three focus areas converge in a singular vision to create healthy squadrons, who excel in multi-domain warfare and ready to lead the joint force.

“It’s the secretary and my job to release the brilliance found throughout the Airmen in our Air Force,” said Goldfein.