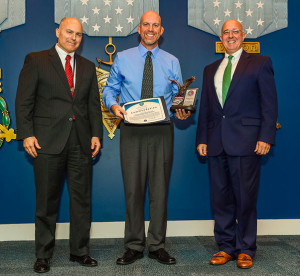 From left: U.S. assistant secretary of Defense for Homeland Defense and Global Security, Kenneth P. Rapuano, hosts the annual DOD National Preparedness Award Ceremony in honor of the 2016 recipients in the Hall of Heroes in the Pentagon Sept. 21, 2017. David Babcock, 812th Civil Engineer Squadron, poses with the top individual award along with Robert G. Salesses, deputy assistant secretary of Defense for Homeland Defense Integration and Defense Support of Civil Authorities.

His award recommendation calls him “Mr. Disaster Preparedness.” He also has another alter ego — Eddie Bee Ready. Now, he can be called a Department of Defense award winner.

Babcock was presented the award in the Hall of Heroes at the Pentagon outside Washington, D.C.

“It’s humbling to win this type of award, it feels like my work is getting noticed,” Babcock said. “Leadership has put me on a path where I can do my job. It’s a huge accomplishment, and even though it says it’s an individual award, it’s really a team effort; it’s my whole team and supervision.”

His award was one of six handed out by the DOD. The department’s National Preparedness Awards recognize significant achievement and innovation in preparedness by DOD individuals, organizations, and installations. The recipients must demonstrate exceptional achievements in preparedness and leadership within the DOD and its communities, said the official award announcement.

Babcock was nominated locally by the 412th Civil Engineer Group for his efforts and accomplishments that include everything from protecting base assets and the test mission with training and materials, to engaging with the entire Antelope Valley community on mutual disaster preparedness efforts. 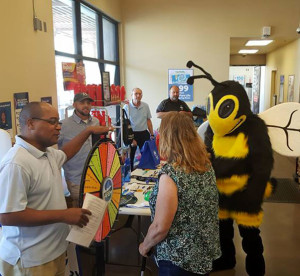 Eddie Bee Ready makes a visit to the Exchange Express gas station as part of National Preparedness Month. Members of the 812th Civil Engineer Squadron Emergency Management Flight regularly dress up as the readiness mascot, including David Babcock who recently won the individual category of the Department of Defense’s 2016 National Preparedness Awards.

“I started taking an interest in emergency management when we had the F-22 crash a few years back. I was working in CE’s Pavements Shop and graded the roads so people could get to the crash site. I started volunteering in other aspects of emergency response and eventually, after bugging supervision, they sent me to Fort Leonard Wood (Missouri) to undergo Emergency Management training.”

Babcock added that he is a “big people person” and what he likes best about his job is working with the base populace and educating children where at times he dons the Eddie Bee Ready costume, which is the Emergency Management Flight’s readiness mascot.