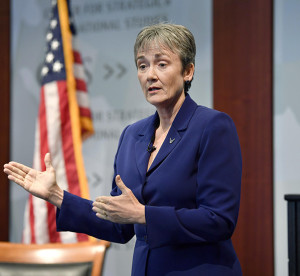 Secretary of the Air Force Heather Wilson speaks at the Center for Strategic and International Studies, Washington, D.C., Oct. 5, 2017. Wilson highlighted the need to invest in our Airmen, readiness, modernization and the future of space operations.

Secretary of the Air Force Heather Wilson spoke about the importance of modernization and innovation in space during a Center for Strategic and International Studies forum in Washington, D.C., Oct. 5, 2017.

“Our mission is to organize, train and equip air and space forces,” said Wilson. “We are the ones, since 1954, who are responsible for everything from 100 feet below the earth in missile silos all the way up to the stars … that’s our responsibility and we own it.”

The Air Force faces significant challenges in space because America’s adversaries know how important space is to the U.S., Wilson said.

She added the Air Force is responsible for providing the world’s first utility, which is the GPS system. This global system which the U.S. military uses is the same system that industry relies on. Whether it’s the local ATM or the stock exchange, the GPS is at the center, Wilson said.

“A huge part of our economy is dependent on what’s done in space,” she said.

The Air Force must deter a conflict in space, and has an obligation to be prepared to fight and win if deterrence fails.

To that end, the 2018 presidential budget proposed a 20 percent increase for space, which Wilson said is the next frontier of global innovation. The Air Force remains committed to gaining and maintaining space superiority across the spectrum of conflict in defense of the nation, she added.

“We need to normalize space from a national security perspective,” said Wilson. “We have to have all of our officers who are wearing blue uniforms more knowledgeable about space capabilities and how it connects to the other domains.”

Wilson added in the future, space will no longer be a benign environment, soon it will be a common domain for human endeavor. Accessibility to space is growing rapidly as launch technology evolves, the cost of launches will drop from thousands of dollars per pound of fuel to hundreds, the technology will get faster and smaller, and more nation-states and individuals will have greater access to space.

“Our most recent launch out of Cape Canaveral was a Space X rocket that launched, and then recovered using GPS guidance technology back on the pad from which that stage launched,” said Wilson. “That wasn’t possible 10 years ago, but it’s being done by American innovation. It’s an exciting time to be part of this enterprise.”