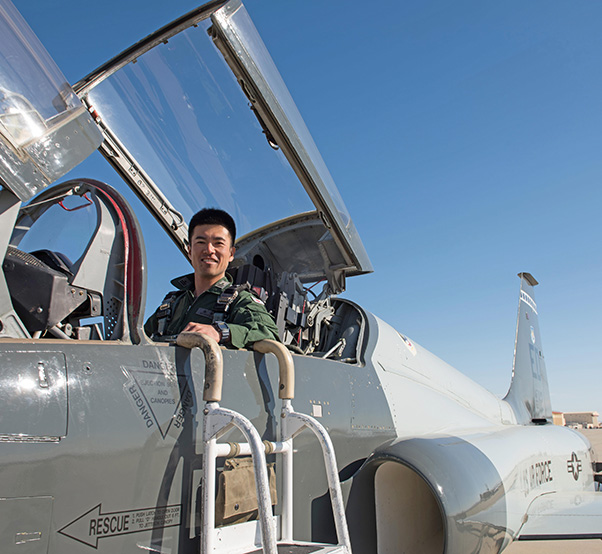 Maj. Naoki Morimoto, a flight test engineer, sits in the back seat of an Edwards T-38 Talon Supersonic Trainer Sept. 26. Morimoto is a member of the Japan Air Self-Defense Force who visited the U.S. Air Force Test Pilot School as part of the school’s student exchange program.

The U.S. Air Force Test Pilot School at Edwards Air Force Base, Calif., invited two Japanese Air Self-Defense Force pilots to Edwards to fly in a T-38 and an F-16.

The visiting pilots were in the High Desert September 24-27 as part of the TPS’s international exchange program. The school sent students to Japan in April 2017 to fly JASDF aircraft, and the Japanese pilots have, in turn, visited here. 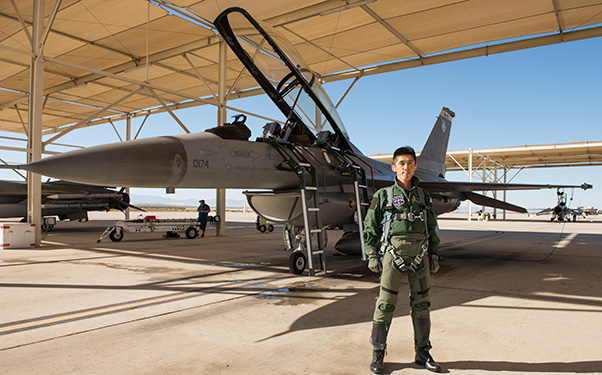 Maj. Haruhiku Naganawa, Japan Air Self-Defense Force test pilot, poses for a photo in front of an Edwards F-16 Fight Falcon Sept. 26. Naganawa visited the U.S. Air Force Test Pilot School as part of the school’s student exchange program and got to fly in the F-16 and in a T-38 Talon Supersonic Trainer.

According to Japan’s Ministry of Defense, the JASDF was established July 1, 1954. Today, the force operates a variety of aircraft including the E-2C airborne early-warning aircraft, C-130H cargo planes, E-767 airborne warning air control aircraft and roughly 260 fighters to include F-15s, F-16s and F-4s.