The effort will stabilize energy costs, which will increase funds available for future improvements in housing, according to Josh Crawford, Corvias business director. Corvias manages all of Edwards AFB’s family homes on the installation.

“Corvias is working to support DOD goals to install renewable resources and increase power grid resiliency,” Crawford said. “The housing program benefits by providing energy rate stabilization. While residents should not see a reduction or increase in their power bill, the community is benefitting with increased energy security and a reduction in carbon emissions.” 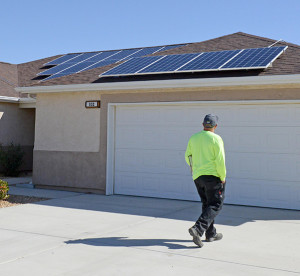 A member of an inspection team looks at the newly installed solar panels on this vacant house in the Tamarisk Plains neighborhood Oct. 11, 2017. This house is the first of 368 homes to be fitted with solar panels on Edwards Air Force Base. Calif.

He added Corvias will be buying less electrical power from the grid and will be paying the capital and generation costs associated with the solar panel installation.
“Over the long term, solar panels will reduce total energy costs and will increase the amount of funds available to the Corvias and Air Force partnership for reinvestment into the homes and amenities on base,” said Crawford.

The 412th CEG Energy Management Team assisted Corvias through their planning and design process such as the allocation and approval of their power generation plans and has served as the liaison with the local electric power utility to reach an interconnectivity agreement that will support more than 3 megawatts of electrical power — about 80 percent of power used by housing annually, according to 412th CEG officials.

The reduction on the strain to the base’s electrical distribution network is said to enable Edwards to increase its electrical capacity for growth in other areas.

“From the base’s standpoint, Corvias has been a strategic partner in the development of our energy resilience strategy and we can incorporate their solar generation into our portfolio,” said Gerald Boetsch, 412th CEG portfolio optimization chief. “This allows us to focus distributed generation assets on mission-related efforts where their economics can be realized, while ensuring housing residents have power available during a major grid outage.” 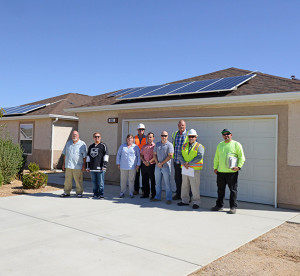 Members of the 412th Civil Engineer Group, Corvias and a solar panel contracted company stand in front of the first base home with installed solar panels Oct. 11, 2017. The vacant house is the first of 368 base homes to be equipped with solar panels. Installation of the solar panels is expected to be completed in the spring of 2018.

The solar panel installation is part of Edwards AFB’s continual effort to reduce energy and natural resource consumption such as water. The base has constructed three solar fields in recent years and has been recognized for its overall conservation efforts.

“The energy management team is consistently driving energy savings initiatives and bringing resiliency to our base to meet the vision of delivering energy resiliency to the world’s greatest Air Force of the 21st Century,” said Ricardo Castillo, 412th CEG electrical engineer.

The installation of the solar panels is expected to be completed by next spring.