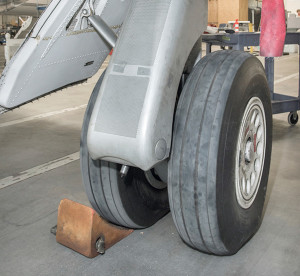 The Landing Gear Noise Reduction fairing was designed to be porous, featuring small holes that allow air to pass through. The design was studied in computer simulations before undergoing model testing, and was ultimately scaled up to be integrated onto NASA’s Subsonic Research Aircraft Testbed G-III aircraft, or SCRAT.

NASA has concluded a flight test series to investigate technologies that may significantly reduce airframe noise for communities near airports.

The flights, which gathered data that will be used to examine the acoustic benefits of two NASA aeronautical technologies, were completed in October at NASA’s Armstrong Flight Research Center in Edwards, Calif.

The combined areas of research included NASA’s Landing Gear Noise Reduction technology, or LGNR, and a flexible, twistable wing flap that has also been used to investigate improved aerodynamic efficiency. These technologies, when combined to explore their potential for reduced airframe noise, primarily during landing, are known as Acoustics Research Measurements, or ARM.

NASA conducted the flight tests by flying two Gulfstream III aircraft, one baseline and the other modified to include the flexible wing flap technology, over a 250-foot diameter microphone array developed at NASA’s Langley Research Center in Virginia. The state-of-the-art array, consisting of 185 hardened microphones and designed to withstand the harsh desert environment of Edwards, was arranged in a pattern of 12 spiral arms on the Rogers Dry Lakebed.

The array was designed to identify those components of the aircraft that produce the highest levels of airframe noise, including elements that are deployed during the aircraft’s approach and landing, such as the wing flaps, main landing gear, and nose landing gear, according to NASA Langley Principal Investigator Mehdi Khorrami. “We want to reduce airport noise for communities, and for that we need to reduce airframe noise,” Khorrami said. “Of all the sources that contribute to airframe noise, landing gear is one of the most prominent. To effectively reduce aircraft noise, we need to mitigate the noise being emitted by the landing gear, which travels to the ground and affects communities around airports.”

Complementing the array are four individual microphones on separate stands, located around the perimeter of the array, called certification microphones. These microphones measure the total amount of noise the aircraft makes as it flies over. Researchers can compare the data from both the baseline and modified aircraft, and can thus calculate the exact amount of total noise reduction resulting from the technologies on the modified aircraft. These particular sets of data will help NASA closely follow guidelines for certification by the Federal Aviation Administration.

In order to address the noise produced by aircraft landing gear, NASA made modifications to the landing gear of a G-III research aircraft, as well as the main landing gear cavities, which are the openings in the bottom of the wing that the main landing gear normally retracts into. The concepts, shapes, and technologies for LGNR were developed at NASA Langley, where they also went through initial wind tunnel testing in 2012 and 2013.

Engineers at Langley designed and developed a landing gear fairing that is porous, meaning it has numerous small holes on its frontal face that allow air to pass through. Model testing of this fairing confirmed predictions based on previous computer simulations that this technology would result in reduced noise levels. The technology was ultimately scaled up and integrated onto NASA’s Subsonic Research Aircraft Testbed G-III aircraft, or SCRAT. 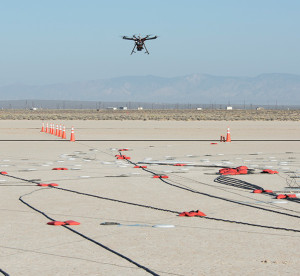 A small unmanned aircraft system was used to test and validate a microphone array, designed by NASA Langley and positioned on the Rogers Dry Lakebed near NASA Armstrong. The array, which consisted of 185 microphones, spans over 250 feet in diameter, and was designed to be able to identify which parts of an aircraft produce the most airframe noise.

In concert with this effort, NASA also examined the acoustic benefits from a flexible trailing-edge wing flap, which has also been used to study improved aerodynamic efficiency through a project called Adaptive Compliant Trailing Edge, or ACTE. Built by Flexsys, Inc. of Ann Arbor, Michigan, the seamless, twistable flap was developed as a joint effort between NASA and the Air Force Research Laboratory to determine whether advanced flexible wing flaps can make an aircraft more efficient in flight.

The ACTE flap was recently flown to validate its ability to reduce vortices off wing flaps at high speeds, and in May demonstrated the first ever flight of a twisted flap configuration. In addition to its aerodynamic benefits, the ACTE flap also produces lower airframe noise levels, according to project manager Kevin Weinert.

“ACTE technology also reduces noise as a byproduct that wasn’t part of the original intent of that technology,” explained Weinert. “ACTE testing didn’t measure noise directly, but we believed that, due to the reduction in vortices off the flaps, noise would be reduced as well. So it became a synergistic benefit having ACTE flaps on the airplane during the landing gear tests.”

In addition to the possibility of this noise-reducing technology being integrated into manufactured aircraft in coming years, Weinert says he believes it may be applicable to different classes and sizes of aircraft.

“I can certainly see this being something that may be integrated into aviation within the next 10 years, as reducing noise for communities around airports is a goal of aircraft manufacturers,” Weinert said.

“I absolutely see this technology being applicable to other classes of aircraft as well, the biggest interest being full-size transport aircraft – commercial airliners.”

With the conclusion of flight tests, researchers will now analyze the data to determine how much airframe noise reduction resulted from the integrated technologies. Khorrami says initial indications look promising.