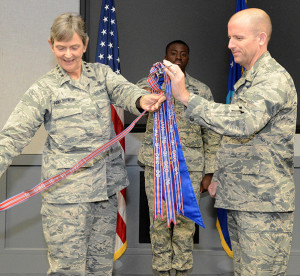 It takes a lot of hard work and a total team effort to send dozens of new flight test pilots and engineers into the world.

That’s what the U.S. Air Force Test Pilot School at Edwards Air Force Base, Calif., does every year, and for that effort, TPS was recently awarded the Air Force Organizational Excellence Award.

The AFOEA is awarded to internal organizations that are entities within larger Air Force organizations. They are unique, unnumbered organizations or activities that perform functions normally performed by larger organizations such as numbered wings, groups or squadrons.

As a special treat, commander of Air Force Materiel Command, Gen. Ellen Pawlikowski, dropped by the TPS schoolhouse Oct. 12 to officially present the award to the TPS staff and leadership. Pawlikowski was also at Edwards AFB for the celebration of the 70th Anniversary of Supersonic Flight held Oct. 13-14.

Edwards AFB falls under AFMC, which employs more than 80,000 people and has a budget of $60 billion.

Pawlikowski attached the new unit award streamer to the TPS guidon after the award citation was read.

“The Air Force Organizational Excellence Award is clearly an unambiguous recognition at the Air Force-level of the exceptional performance and impact of the school as a group-level organization,” said Col. Matthew Higer, U.S.A.F. TPS commandant. “Presentation of the AFOEA and brief remarks by Gen. Pawlikowski after the presentation clearly display the vital nature of test to the broader acquisition and sustainment enterprise.” 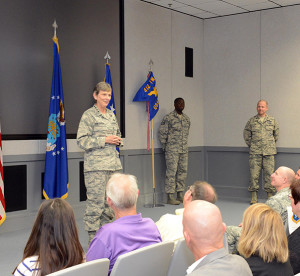 The test pilot school awards a Master of Science in Flight Test Engineering to all graduates who complete a rigorous curriculum.  During the two-year award period, TPS executed AFMC’s largest flying operation producing more than 5,000 flights and 7,900 hours in 25 different aircraft type. The school graduated 84 students from across the Department of Defense and eight allied nations.

Higer added that the last time TPS won an AFOEA was in 1995.