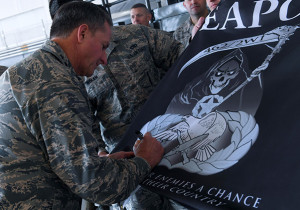 Air Force Chief of Staff Gen. David L. Goldfein signs the Barksdale Air Force Base Weapons flag at the Weapons Load Training hangar at Barksdale AFB, La., Oct. 17, 2017. Goldfein met with Airmen throughout the day to discuss the nuclear mission and the role they perform to execute it.

“If I had one message for you today, it would be that you underwrite every military operation on the globe,” Goldfein said. “So in the pressure campaign we continue to enable Secretary Tillerson to apply pressure against North Korea, you need to know that what you do here every single day is a significant and central part of that pressure campaign.”

The general explained that to understand and prepare for the future and the continuing evolution of warfare, Airmen must think globally across six domains.

“We’ve got to think about future conflict as multi-domain, and that’s not necessarily one domain supporting another – that’s all domains operating simultaneously. Think about how we sense the globe. I offer that we sense the globe in six domains – air, land, sea, space, cyber and undersea,” he said.
“Multi-domain operations is about how you sense the globe, create the common operational picture, achieve decisions and create effects from those same domains at a pace that the adversary can never match. What I just described may very well equal deterrence in the 21st century.”

Answering a question from an audience member, Goldfein explained how Airmen can successfully lead the Air Force into the future.

“To a young [noncommissioned officer], Airman, or officer, I would tell you that the foundation of successful leadership is character. Character is about what we do every day, decisions we make, the core of who we are, and what we do when no one else is watching. Reputation is about what people think of us after they’ve watched us for some period of time.” Goldfein said. “We should never get those confused because if you actually focus on the first, which is character, the second will take care of itself – reputation.”

During his visit, Goldfein met with the Airmen responsible for weapons and munitions as well as the B-52 Stratofortress aircrews who help keep the bomber fully operational and deployable 24/7.

The 2nd Bomb Wing, under command of 8th Air Force and Air Force Global Strike Command, all located at Barksdale AFB, provides support for one leg of the nuclear triad by maintaining the B-52, a long-range bomber capable of delivering nuclear and conventional ordnance worldwide.