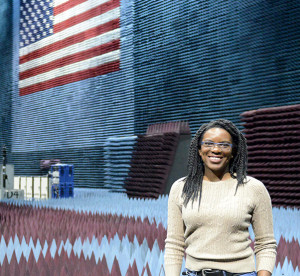 Amarachi Egbuziem works with the 772d Test Squadron, which oversees electronic warfare testing at the Benefield Anechoic Facility. “I knew I wanted to become an engineer when I was in the sixth grade. There was no other job where I could build and play with electronics all day. It was an easy choice. I knew about Edwards from a career fair at my school.”

Brain power is key to testing the most advanced aircraft and aircraft systems in the world.

Where better to find that brain power than within the halls of the finest universities in the world.

Each year, the 412th Test Engineering Group sends recruitment teams as far away as Georgia in search of young talent to pave the way for the future of flight test at Edwards Air Force Base, Calif. This effort by the group seems to be paying off with 63 new engineers hired in the past two years.

“The 412th TENG’s recruitment program is the best recruitment outreach program at Edwards,” said Brianna Van Norden, former 412th TENG Recruitment Management specialist now with the 412th Range Squadron. “Young people can bring important insights to testing here at Edwards AFB, especially with rapid changes in technology. If you put time and effort in who you are trying to recruit, ultimately the development of your organization benefits with a team of enthusiastic new talent.”

According to the Department of Education website’s science, technology, engineering and math page, only 16 percent of high school seniors proficient in math are interested in a career in science, technology, engineering and math — collectively known as STEM. The federal government has identified the need for increased emphasis on STEM education as the path to remain a global power.

The developmental testing of the fifth-generation F-35 Joint Strike Fighter and the new KC-46A refueling tanker — along with the continual technological upgrades to every aircraft in the Air Force’s inventory — highlight the need for new employees with STEM backgrounds heavily at Edwards. 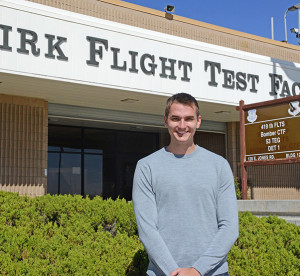 Kevin Butler, 775th Test Squadron, is a flight test engineer responsible for making sure weapon-related integration is being tested appropriately, currently for the 419th Flight Test Squadron. Butler has been at Edwards for a little over a year after graduating from U.C. Davis with a bachelor’s degree in mechanical engineering and then a master’s degree from U.C. San Diego in materials, solid mechanics and design.

“Formal technical background is essential to the work we do here,” said David Wheaton, 412th Test Wing senior technical director. “We test state-of-the-art, cutting-edge aerospace systems and technology. It is the most advanced technology in the world. The warfighter uses the systems we test in combat.  Our engineers get directly involved with the end users of these systems and technology — very cool,” Wheaton said.”

Three of those newly hired engineers hit the ground running, fully immersing themselves in the world of test. All were hired straight out of college following university visits from Edwards recruiters.

“One of the main reasons I wanted to go into testing was that the job is constantly changing, I never do the same thing two days in a row,” said Kevin Butler, 775th Test Squadron. “I am also in a position where I get to test cutting-edge technology and work with all of the various people who developed it.”

An armament flight test engineer, Butler ensures weapon-related integration is tested appropriately. Most recently with the 419th Flight Test Squadron, he played an integral part of the test firing of a new U.S. Navy Long Range Anti-Ship Missile from an Edwards B-1B Lancer.

Fresno, California, native Amarachi Egbuziem works for the 772nd Test Squadron at the Benefield Anechoic Facility, the largest anechoic facility in the world. Teams test electronic warfare systems on aircraft in an environment free of electromagnetic inference from the outside.  Egbuziem started working there after graduating from California State University, Fresno with a degree in electrical engineering.

“When I found out that there was a place where you could just do testing and not have the headache of design, I knew I had to try everything in my power to get an interview there,” Egbuziem said. “What I like about my job is that most days there is an issue and I get to try and fix that issue by testing and playing with equipment. You wouldn’t be able to do that with most aircraft; that is why I think this squadron is very different from the rest. There is also a great sense of accomplishment when you walk into the chamber, right before a test begins, and you see the aircraft amongst all of the RAM (radiation absorbent material) that took weeks to put into place, it looks amazing. 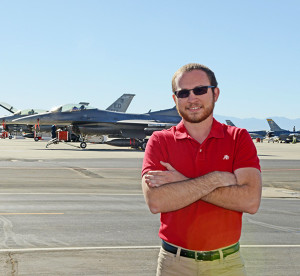 Daniel Ciolkosz works as a radar engineer at the 416th Flight Test Squadron testing legacy and new radar systems for the F-15 and F-16. He writes test plans and flight cards, executes the test, then analyzes the data. Ciolkosz helps test the radars in operationally representative scenarios to understand the characteristics of the system under real-world situations. He joined Team Edwards after his current flight chief visited California State University, Fresno, on a recruiting trip in search of talented college graduates.

Another Fresno State graduate, Daniel Ciolkosz, works as a radar engineer at the 416th Flight Test Squadron testing all new and legacy radar systems for F-15 and F-16 fighter jets.

“I love being able to talk with the best pilots in the world and work on systems that will have a real world impact on the warfighter risking their lives. I really enjoy being able to make a difference with helping the Air Force decide on whether or not to spend hundreds of millions of dollars on a specific system.”

Ciolkosz’s current flight chief visited his university as a recruiter and hired him soon after.

Those interested in a career at Edwards AFB can visit http://edwardscareers.com. The 412th TENG also has a Facebook page at https://www.facebook.com/412TENG/.