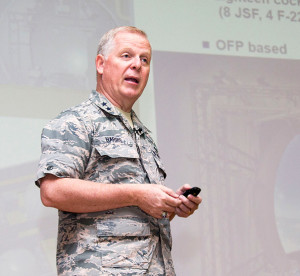 People, mission, money and challenges set the tone for Maj. Gen. David Harris’ discussion at his latest commander’s call in the base theater Nov. 1.

As Air Force Test Center commander, Harris oversees a $31 billion test enterprise across three military installations (to include Edwards Air Force Base, Calif.) and 31 geographically separate units across the country.

Harris began the call by recognizing Air Force- and major command-level award winners both in the audience and across the AFTC, noting that the center has an “embarrassment of riches” when it comes to winning individual and organizational awards.

The general then moved on to the heart of the meeting: discussing the current state of the AFTC and its future.

An innovative project coming to Edwards is the Joint Simulation Environment, a $43 million facility part of a larger joint venture between the U.S. Navy and Air Force. The Joint Simulation Environment creates virtual environments using advanced flight simulators to collect test data. Harris said advanced technology of new aircraft, which today are digitally interconnected to each other using networks, highlights the need for these facilities.

“The tactics are such that you may never see your wingman. Your wingman may be too far away for human eyes to see. We can’t test that,” said Harris. “We have no anechoic facility that big; it would have to be the size of Kern County. We’re going to have to find another way of testing all this digital wizardly that links all of our aircraft together.”

He likened the virtual test environments to the blockbuster film “The Matrix.”

“We just don’t have the airspace anymore. We can’t generate the threats. We’re going to have to generate it in cyberspace,” he said. “It’s going to be computer generated and capable of scientifically defensible test results…and those of you here at Edwards are going to have a big part.”

Harris highlighted other projects around AFTC such as the activation of a new group with three squadrons at Eglin Air Force Base, Florida, to handle cyber testing for the Air Force. At Arnold Engineering Development Complex in Tennessee, $225 million dollars is headed there to conduct hypersonic tests of new weapons and engines aiming at speeds of Mach 7 and beyond.

The general also commented on the Air Force’s expanding role in space.

“Space is a contested domain. We have to be prepared for our adversaries to take military action against us in orbit. How are we going to test that? In outer space,” Harris said.

Challenges facing AFTC focus on aging infrastructure and manpower shortages. Many facilities in the AFTC date back to World War II, Harris said. He noted how a fire damaged the McKinley Climatic Laboratory at Eglin AFB in the summer and how other test facilities in Silicon Valley and at AEDC suffered heavy damage. The aging facilities, discontinued parts and cost of repairs, hinder recovering those test facilities. However, regardless the costs associated with repair, Harris said senior leadership understands the importance of test.

“The Air Force recognizes the infrastructure in the Air Force Test Center is getting old. Much of it was acquired just after World War II and help is on the way on the order of hundreds of millions of dollars of new investment for our infrastructure,” said Harris.

The general then turned the mic over to Chief Master Sgt. Christopher Lantagne, AFTC command chief, who touched on the manpower accomplishments of the AFTC in the past year citing how the total team effort supported 6,300 test programs and 19,000 flight hours. He emphasized how important the 3,000 deficiency reports AFTC conducted are to the Air Force.

“That’s 3,000 things that would have went out into the field to our warfighters had we not been doing our job,” Lantagne said.

Lantagne reminded the Edwards audience to continue to look out for fellow workers now and in the future.

“There’s lots of work coming, lots of money being invested. Look to your left and look to your right, that’s who is going to do it. We need everybody on their game to get this mission done,” said Lantagne.

“We are running very lean on people. I wish I could say the cavalry is on the way, but as the chief said, realistically it’s just not happening. We’re going to have to find a way to get this mission done with the resources that we have for the most part,” Harris said.

Harris concluded the commander’s call by emphasizing the importance of the hard work done by everyone at the AFTC.

“We stood up developmental test in the middle of World War II when time was really at the essence. When thousands of servicemen everyday were being killed. As the number of operations we do around the world increases, it seems like we’re everybody’s Air Force now. Just watch the news, we’re everybody’s Air Force and nobody seems to win without us. And nobody seems to be able to lose with us. If you go back to World War II, you’ll find that without us, it’s way more expensive,” said Harris.