A B-2 Spirit bomber is backed into the Benefield Anechoic Facility Nov. 28, 2016. The Air Force released photos this week of the stealth bomber’s first time in the BAF.

Last November, a B-2 Spirit entered the Benefield Anechoic Facility at Edwards Air Force Base, Calif., for the first time.

Photos released by the Air Force this week show the stealth bomber being backed into the BAF to undergo environmental control systems checks.

According to staff members, the BAF team spent a year preparing for and installing new equipment for the B-2s maiden entrance into the anechoic chamber. The BAF plans to host the B-2 for future electronic warfare testing. 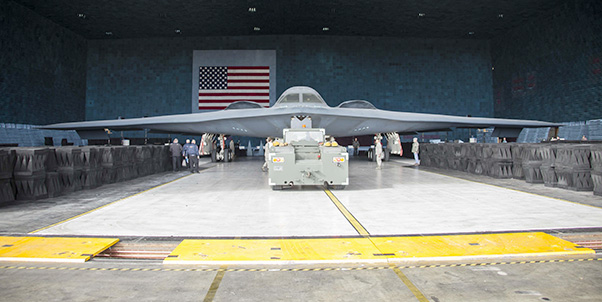 The BAF, operated by the 772nd Test Squadron, is the largest anechoic chamber in the world and can fit almost any airplane inside. It provides a signal-free space so electronic warfare tests can be conducted without radio frequency interference from the outside world.

Completed in July 1989, the BAF continuously conducts electronic warfare testing on all types of aircraft, from U.S. Air Force aircraft to allied nations aircraft. The chamber is filled with polyurethane and polyethylene pyramids — radar absorbing material — designed to stop reflections of electromagnetic waves. The size of the pyramids, which are painted dark blue or black, varies depending on the particular frequency and test procedure being conducted. Aircraft systems can be tested and verified that they work properly prior to actual flight test.