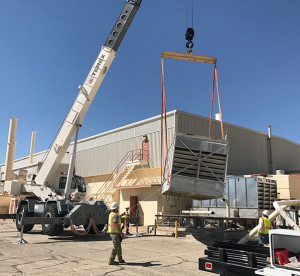 The Rocket Lab’s chemical laboratory requires chilled water to provide cooling to the lab where temperature and air pressure are critical to life, safety and maintaining required test conditions.

“One of two cooling tower units had already failed and the other could fail at any time,” said Murray Westley, 412th CES director. “If the second unit would have failed, this would have caused complete loss of AFRL’s chemical laboratory function. Additionally, the 40-ton condensing unit was also unserviceable and was a maintenance nightmare.”

Westley said HVAC crews led by Michael Mundy and Matthew O’Carroll designed, planned and installed the two new cooling towers and 40-ton condensing unit without hindering the Rocket Lab’s mission. With the help of 412th CES’ Pavement Element’s heavy equipment shop, the team removed the old cooling towers in stages to allow for one tower to always be in service.

“This synchronized effort required great skill in using a 55-ton crane to lift the old unit off and reinstall the new unit while ensuring the other cooling tower remained operational,” said Westley. “In addition, HVAC personnel replaced piping, couplings and complete fabrication of the cooling tower support structures. The 40-ton condensing unit was also replaced in stages in an effort to not disrupt AFRL operations.”

The project lasted seven months with most work being done on the weekends. Westley said the work came in addition to the daily preventive maintenance efforts required to sustain Edwards AFB’s $1.2 billion in equipment and infrastructure, making it quite an accomplishment for his squadron.

“The combined efforts of the Infrastructure and Pavement Flights far exceeded the normal in-house repairs expected of a base-level CE squadron, but were necessary to sustain the AFRL mission while saving over $600,000 in project labor and management costs. I am extremely proud of the 412th CES as a whole, and in particular, the awesome accomplishment of the Infrastructure and Pavement Flights,” Westley said.