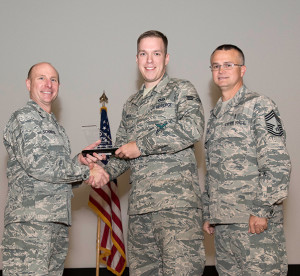 Each quarterly winner came on stage to receive their award from Brig. Gen. Carl Schaefer, 412th Test Wing commander, and pick an Air Force category followed by a question.

Congratulations to all award winners!

Trades and Labor of the Quarter
Justin Anthony
412th MXG