Edwards Air Force Base in California’s High Desert is well-known for its firsts; first flights of aircraft, first time breaking the sound barrier, first shuttle landing site, and the list goes on.

This week, another first happened at Edwards, but it wasn’t in the sky, it was in the classroom; a civilian employee here took the top honor for Edwards Airman Leadership School’s Class 18A.

Robert Topp, a maintenance mechanic with the 412th Civil Engineer Group earned the John L. Levitow Award, which is the highest award for enlisted Professional Military Education in the Air Force and is presented to the student who demonstrates the most outstanding leadership and scholastic achievement.

Topp said the opportunity to attend ALS was presented and encouraged by his leadership, and when he initially started ALS, he just tried to get the most he could out of the course, and had no focus on awards.

“To hear your name called, and to hear you’re the first civilian to win the award — I was shocked and honored,” Topp said. “It’s mind boggling.”

“In my opinion, Mr. Topp exudes professionalism,” said Master Sgt. Daniel Magas, commandant of the Airman Leadership School here. “Attending ALS as a civilian is a daunting task but he more than proved his potential as a Total Force Airman.”

Topp has been at Edwards as a civilian employee for 12 years, starting with CE when he was still in college, and has no prior military experience. 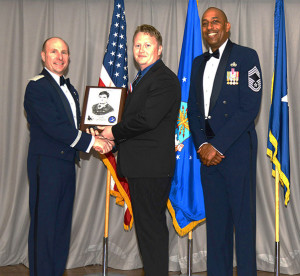 “As if ALS was not difficult enough, his federal time in service made him one of three senior ranking students and garnered him the position of flight leader,” Magas said. “When civilians volunteer to attend ALS they are grasping at opportunity, opportunity that is not offered at many Airman Leadership Schools. Mr. Topp is changing the status quo and making himself marketable in an ever-demanding Air Force that needs effective leaders who are willing to lead boldly.”

Topp said Airman Leadership School was a big change of pace from his normal duties, but he wanted the chance to improve, and to grow.

“The fact that the Air Force puts this kind of effort into developing its civilian workforce, especially the Wage Grades, really impresses me,” he said.