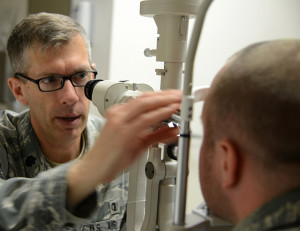 All eyes were on an officer at Edwards Air Force Base, Calif., recently as he received top-level recognition for his work in the field of optometry.

The award was presented in October at the annual Air Force Optometry Society convention in Chicago. It is given to the optometrist who best represents Optometry in four areas: Public Service (education, community, religious/service institutions, charitable causes), Service to the Visual Welfare of the Public (including government health care programs), Service to Optometry (personal effort and time to advance the profession) and Service to AFOS and Professional Organizations.

“I am extremely humbled by this recognition,” Baird said. “I have been very, very blessed: an exceptional wife, amazing children, wonderful co-workers and mentors! I attribute any success I have had along the way to my family, following the Golden Rule, and trying to put God first in my life!

I love being an optometrist. I love helping people be able to see better, and also helping them use their visual abilities more effectively (but I’m not so sure about all the paperwork),” he added.

Baird has also been involved in other optometry-related capacities such as presenting vision optimization training to the Airlift/Tanker Association, giving elementary school presentations, ten presentations for the American Academy of Optometry on topics such as visual perception, traumatic brain injury, keratoconus, and the effect of altitude on intraocular pressure, and five Sports Vision and traumatic brain injury presentations for the American Optometric Association. He volunteered as a sports vision specialist and cameraman at the local high school, serves as the AFMC optometry consultant providing oversight of 300,000 patient encounters annually, and recently finished service as a council member of the AOA’s Sports Vision section.

“I think the eyes are extremely important, and often overlooked or taken for granted,” Baird said. “It has been said that over 85 percent of all information is gathered through the eyes. If that’s the case, then we really should take care of them. That means wear safety goggles, don’t sleep in contact lenses, take mini breaks when on the computer for extended amounts of time, spend time outside each day, get proper diet, exercise and rest.

Baird has been stationed at Edwards since the Summer of 2015, and has been has been in the Air Force since 1991. After serving a Mormon mission to Switzerland and graduating from Brigham Young University, he served as a Logistics Readiness Officer for seven years including deploying in support of Operations SOUTHERN WATCH and RESTORE HOPE. This was followed by a special duty assignment as a member of Joint Task Force – Full Accounting (now JPAC) searching for prisoners of war and missing or killed in action in South East Asia. Upon completion of this assignment, Baird resigned his commission to attend Optometry School. He graduated in 2007 and reentered active duty at McGuire Air Force Base, New Jersey.

Outside of optometry, Baird can be found serving as a Sunday School teacher, playing the organ for church services, and serving as an assistant Scoutmaster for the Boy Scouts of America.