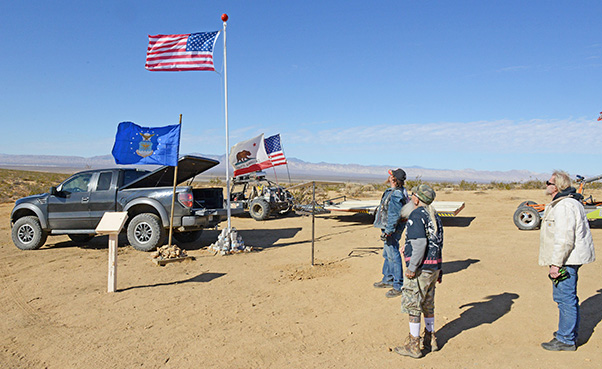 North of Edwards Air Force Base and California Highway 58, a small patch of barren desert marks the final flight of one of only two Northrop YB-49s used for flight test.

Remnants of the YB-49 flying-wing experimental aircraft are still strewn along the desert floor, which crashed June 5, 1948, killing all five crew members.

Years ago, members of California City’s Veterans of Foreign Wars Post 9375 planted an American flag at the crash site along with a standing box containing a booklet with historical information. Three of those VFW members returned Dec. 4 to stand up a new American flag, continuing to honor the memory of the YB-49 and its crew.

“It’s just something we do to give back to our military,” said Cliff Bearden, VFW Post 9375. “The flags get pretty worn in the desert so every couple of years we get together and replace it with a new one.” 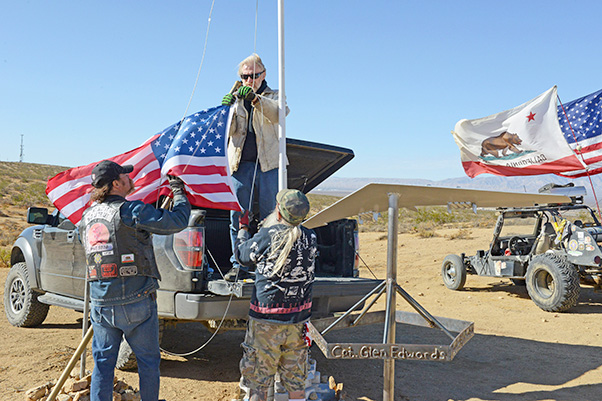 Pictured left to right: Cliff Bearden, Rick Mcendarfer and Don Cook ready a new American flag to be flown at the crash site of the Northrop YB-49 Dec. 4, 2017. According to Bearden, members of the Veterans of Foreign Wars Post 9375 out of California City planted an American Flag at the crash site years ago and periodically replaces the flag with a new one.

The crash of the YB-49 stands out in the history of the region as Edwards Air Force Base bears the name in honor of California resident Capt. Glen Edwards who served as copilot on the doomed test mission. Other crew members included pilot, Maj. Daniel Forbes Jr., Lt. Edward Swindell, Clare Lesser and C.C. La Fountain.

Results of flight testing showed generally good performance; however, stability during simulated bomb runs and political problems doomed the flying wing, according to the Air Force.

After the crash of the second YB-49 here in the high desert, the first aircraft was modified with additional flight performance measuring instruments before tests were resumed. On March 15, 1950, YB-49 No. 1 was conducting a high-speed taxi run test when the nose wheel began to shimmy violently. The nose landing gear collapsed and the aircraft broke in two and was destroyed.

The flying wing bomber concept would remain dormant until the appearance of the B-2 Spirit stealth bomber nearly 40 years after the last flight of the YB-49. 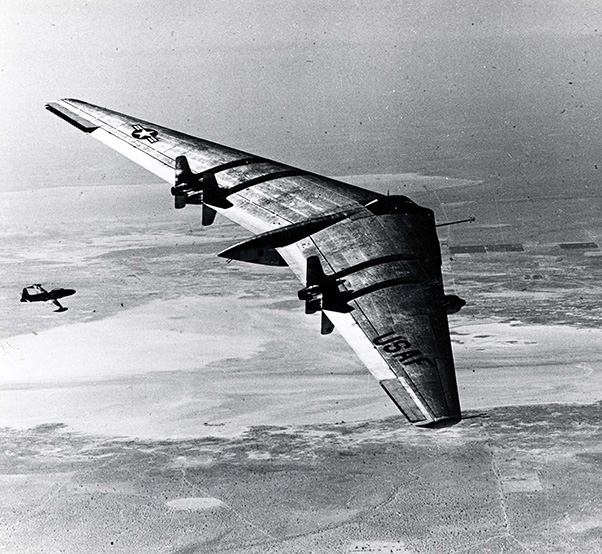