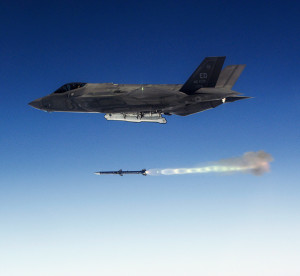 “Weapons delivery accuracy tests are important, because without proof that the F-35 can actually drop these weapons where we need them to go, then the F-35 is just an information-gathering system,” said Lt. Col. Tucker Hamilton, 461st FLTS commander and F-35 ITF director. “The F-35 proved it was extremely capable in delivering these weapons where we wanted it and how we wanted it delivered. These are the most complicated and intricate missions that we had and the jet did extremely well.”

Hamilton said the air-to-air accuracy tests finished in August with air-to-ground tests ending in October. The F-35 ITF then capped off WDA tests by completing testing on the F-35’s GAU-22 25mm gun at the beginning of December. The WDA gun tests included the Air Force’s A variant where the gun is internal carried and on the Marine Corps’ and Navy’s B and C variants, which employ a gun pod beneath the jet.

Each weapon test required multiple missions including software development, “dry runs” and then the actual weapon release. Not including the gun, Hamilton said the F-35 ITF delivered 55 weapons during WDA testing, which was mainly done over the military sea range off the California coast and at Naval Air Weapons Station China Lake in California.

“I didn’t even know it was a milestone, I just knew I was dropping a weapon,” said Gilbert. “It wasn’t until after that I felt the excitement from the team and the squadron to close out the WDA program. It is a credit to the team and the planning as it did not appear this would be achievable in the time the squadron accomplished it in, but yet they were able to complete it. I just had the pleasure of dropping the last one.”

Hamilton said the F-35 Joint Program Office analyzes the data from all the WDA tests and any upgrades to the F-35 mission systems software will be sent out to the F-35 operational fleet.

“When they get their 3F software, the one that is going to be productionized for full 3F capability, [the fleet] will be confident they can load these weapons and drop them on the target they’re selecting,” Hamilton said.

“The ITF takes these extremely challenging and intricate data requirements and then finds a way to coordinate with multiple outside agencies, drones, tankers, ranges and basically conduct these missions and make them happen in a historical manner,” said Hamilton. “No one before them has ever been able to pull off executing weapons deliveries like the individuals in the ITF.”