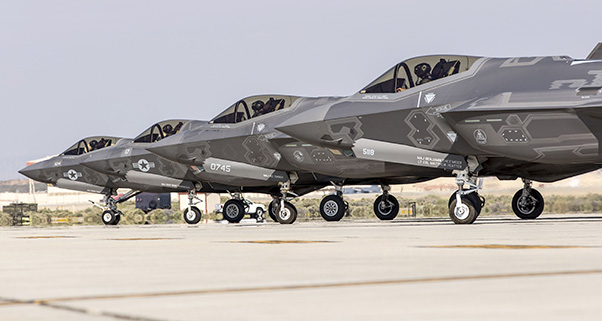 Developmental and operational testing of the F-35 Joint Strike Fighter (pictured) are just two of the many test programs Edwards AFB continues to oversee in the new year. The 412th Test Wing held the annual Back in the Saddle briefing Jan. 2 to remind the Edwards workforce to be safe as it enters a busy 2018.

Before heading into the year with full force, the 412th Test Wing at Edwards Air Force Base, Calif., took a pause to remind its workforce to be safe while conducting its test mission.

Everything from aircraft in-flight emergencies to workplace injuries were examined at the Airman and Family Readiness Center during the annual Back in the Saddle briefing held Jan. 2, 2018.

Briefers urged an audience made up mostly of flyers, engineers, maintainers and airfield operations personnel to continue to focus on safety, teamwork and mishap prevention as the wing enters another busy year of flight test operations.

“It’s about taking time to reflect; we spend a lot of energy in here to make sure we make 2018 as safe as it can be,” said Brig. Gen. Carl Schaefer, 412th TW commander.

Back in the Saddle combines mishap reviews from fiscal year 2017 with informational briefings for the workforce. Throughout the four-hour morning briefing, personnel listened to briefings about lessons learned in 2017 both at Edwards and throughout the Air Force.

In addition to continuing its dynamic mission in 2018, Edwards AFB, along with the rest of the Air Force, faces the task of keeping in line with Air Force leadership’s commitment to getting the force back to full warfighting readiness.

“If you listen to our chief of staff, we are 16 years into a 30-year war and I agree with him,” Schaefer said. “We’re going to be at war with violent extremism for at least 15-20 more years. In the midst of that, we kind of lost our edge as a service and as a nation for a high-end fight. What you’re going to see across the Air Force is a ratcheting up of our readiness.”

The general explained that the Edwards mission adds to the Air Force’s wartime capability by testing and sending lethal and more capable weapons to the war fighter for that high-end fight.

Schaefer also noted that Edwards Airmen continue to deploy in support of combat operations, which can leave units relying on less personnel to get the mission done.

Overall, 2017 proved to be a very safe year for the 412th Test Wing. There were no major mishaps involving lost aircraft and there were no on-duty fatalities. However, base leadership emphasized the need to reduce minor mishaps, which include workplace injuries and damaging equipment.

Examples of work-related mishaps for Airmen and civilian workers include slips and falls and injuries sustained while working on planes. Sports injuries during physical training or during off-base activities also led to lost work days for people in 2017.

Other subjects during Back in the Saddle focused on upcoming runway repairs, continued safe airfield driving and test safety procedures.