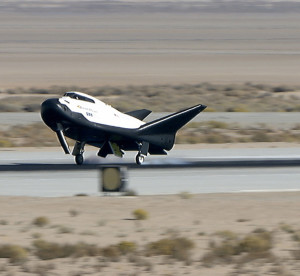 The Sierra Nevada Corporation’s Dream Chaser space plane recently had a successful free-flight test over the Mojave Desert in California, later making its landing at Edwards Air Force Base, Calif.

The Hypersonic CTF at Edwards AFB is an operating location of the Arnold Engineering Development Complex, which is headquartered at Arnold Air Force Base, Tenn.

A Columbia Helicopters Model 234-UT Chinook helicopter was used to lift the Dream Chaser before dropping it to an altitude of almost 12,400 feet for the test. Once dropped, the craft accelerated to 330 mph, made a couple turns and then coasted to Runway 22L at Edwards. With a total glide time of 60 seconds, the plane touched down at 191 miles per hour and rolled 4,200 feet before coming to a stop.

This Dream Chaser version will not have a crew; its intended use is transporting cargo to the International Space Station.

In addition to the flight testing at Edwards and the developmental testing of the EELV at Arnold Air Force Base, the braking system for the Dream Chaser has been tested by AEDC team members at the Landing Gear Testing Facility at Wright Patterson Air Force Base, Ohio, which is part of the 704th Test Group, an AEDC unit.

“I recently took the opportunity on a clear night to gaze into the night sky, and as it happens, the International Space Station was visible,” he said. “As I looked up at the night sky and watched it transit by, I was instantly thankful of the role that AEDC has played in supporting this station. We have developed and helped validate the design of rockets and spacecraft that have brought the parts up to construct the space station.”

Marren added that today AEDC engineers are also working with NASA to develop commercial options for both crew and cargo to resupply the ISS. “We are working advanced hypersonic technologies that may one day be able to help us transit and develop space into a destination,” he said.

The data that SNC gathered from this test campaign will help influence and inform the final design of the cargo Dream Chaser, which will fly at least six cargo delivery missions to and from the space station by 2024.

According to an announcement by Sierra Nevada Corporation of the free-flight test, the Dream Chaser, the first orbital vehicle, is scheduled to go to the International Space Station as soon as 2020 for at least six missions as part of NASA’s Commercial Resupply Services 2 contract.

As the company and NASA move ahead with plans, high speed testing is beginning with the Dream Chaser undergoing testing in the Hypervelocity Wind Tunnel 9 facility testing at Mach 10 and 14 to verify the aerothermodynamics performance of the system. Marren noted more details would be available once testing is completed.