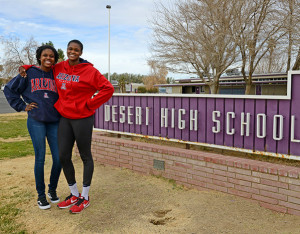 Two years ago, Desert High School students cheered in the gym as volleyball players Devyn Cross and Elizabeth Shelton signed their National Letters of Intent to attend the University of Arizona on full athletic scholarships.

Both players learned volleyball for the first time at DHS, not sure where their futures were headed. After winning California Interscholastic Federation titles and becoming increasingly skilled in their sport, college coaches started to take notice. Scholarship offers started pouring in and the doors of opportunity began to open.

Today, Cross and Shelton are rising stars on Arizona’s women’s volleyball team and fully immersed in college life in Tucson.

Upon returning to the High Desert and their listed hometown of Edwards Air Force Base for the holidays, both student athletes sat down to talk about their college experience so far. Both Arizona Wildcats endure a full class schedule with Shelton majoring in neuroscience and Cross focusing on sociology. The full class load coupled with year-long volleyball preparation keeps them busy.

“It can be hectic if you don’t know how to manage it,” said Shelton. “We still have to work out, play volleyball … and then there’s weight lifting, practice and class.”

“Do not wait until the last minute to do anything,” Cross said. “Homework, grocery shopping, whatever it is, when you think you need to do something then do it.”

The official college volleyball season doesn’t start until August but preparation and conditioning never stop, according to the sophomores. Cross is a middle blocker and Shelton plays outside hitter. Cross led the 2017 Wildcats in blocks with Shelton finishing second in the category. Shelton also finished third on her team in kill shots and named an honorable mention on the Pac-12 All-Academic Team, according the Wildcats’ website.

With several universities offering scholarships, Arizona appealed to Shelton because of its academic support programs for student athletes. Cross said she chose Arizona because the school and people make it feel like a family environment.

For high schoolers, or even middle school students, Cross and Shelton advise potential college athletes to begin their journey early. Cross believes she started “very late in the game” before deciding she wanted to compete in college. Both her and Shelton said to look into recruiting websites and talk to their coaches for advice on moving on to the next level.

“If you’re trying to be recruited for a sport, start your freshman year,” said Cross. “Start looking for a college and getting your name out there early.”