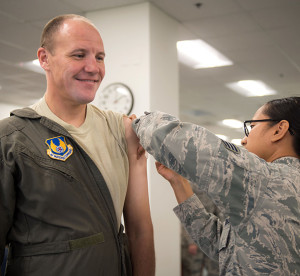 The flu season is in full swing and wreaking havoc across the United States as 46 states have reported widespread activity of the flu with no end in sight.

Many people are falling victim to a potent strain of the flu that doesn’t seem to have full coverage from the flu vaccine.

More than 70 people reportedly died from the flu so far this season.  More and more hospitalizations are occurring across the nation and flu season hasn’t even reached its peak yet.

Taking preventative measures can help people withstand the season. Although flu strains continue to evolve and there is no cure, getting an annual flu vaccine is the first and most important step to protecting and providing immunity against the flu virus. It is more important for high-risk individuals such as young children, pregnant women, people with chronic illnesses and the elderly. Symptoms for those high-risk populations can become more severe and long-term. Additionally, it is imperative that health care workers get the required vaccine to prevent spreading the flu to their patients.

Frequent handwashing is another precaution people should consider. Through proper handwashing, which is washing hands with soap and water for at least 20 seconds, people can help prevent the spread of germs in which the hands are a major source. If no soap and water is available, use alcohol-based hand sanitizers. Avoid touching your eyes, nose and mouth as germs are transmitted in this manner.

Cough and sneeze into a disposable tissue or the crook of the arm, not hands. People should do their best to avoid close contact with others who are sick or ill. If sick, avoid contact with others. Staying home at least 24 hours after a fever is gone is a good practice. Also, cleaning and disinfecting areas/surfaces that are used often by multiple people, or infested with germs, is also a good safety measure.

Active duty members, dependents and retirees who have any cold- or flu-like symptoms such as fever, increasing cough, sore throat, runny nose, headaches, fatigue, nausea or vomiting, can utilize the 412th Medical Group Direct Access Pharmacy without a primary care manager appointment and obtain medications to help alleviate symptoms. If the illness does not resolve or worsens, patients can always make an appointment with their primary care manager.